Global Entry has for years allowed frequent international travelers to breeze through customs. But the new Mobile Passport app might be even better.

Bottom line, having Global Entry rocks, but getting it sucks. Mobile Passport doesn’t have those problems. Just open the app store, download it, open it, scan your passport, enter your flight info, declare, and done. And you can literally do this in the line at airport Customs in a matter of minutes. I know this because that’s what I did, twice, to avoid the lines.

In May of 2015, my then new fiancee and I were coming back from Amsterdam. I had Global Entry, but at the time, Alexandria did not. Sure, I could scoot on through and wait for her on the other side, but that probably would not have been a good start to the engagement. So I opted to stand in the normal Customs line with her. But then I saw a sign.

Just off to the side, in front of it’s own completely empty line, was a sign saying “Mobile Passport enter here.” I was intrigued and read the small print. Apparently, this was an app for getting through customs! And New York’s JFK was one of the first to accept it. A few seconds later I was downloading Mobile Passport.

It could not have been simpler.

After opening the app, just by pointing your phone’s camera at your passport, it captures all the necessary info and creates your profile. You then create a new trip by entering the info from your current itinerary like arrival airport and flight number. 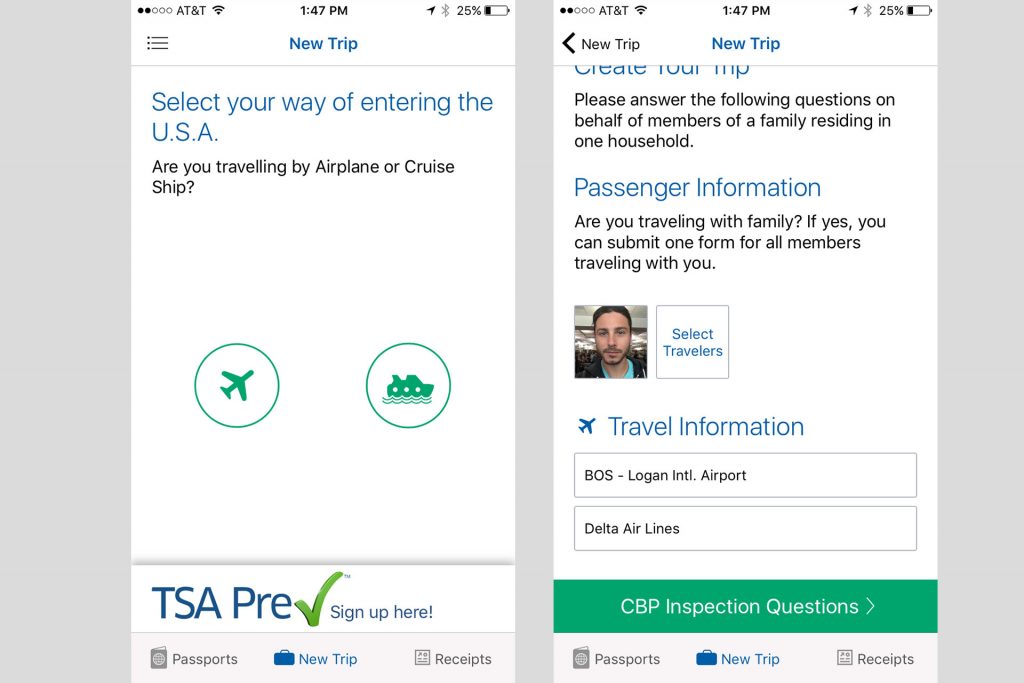 After that, answer those declaration questions about what you are or aren’t bringing into the country. The beauty of this is you don’t need to fill anything out on the plane anymore. When the attendants come around with those forms, you can say, “no thanks, all set!” With the questions completed, continue to get your entry receipt (QR code), and that’s it.

Then what? Walk on through the empty line, present your passport and scan your code with the Customs agent, go get your bags if you have some, then go home.

Both Alexandria and I were able to re-enter the States from our Eurotrip at the same time, without her having Global Entry, in less than 10 minutes.

Just a couple of weeks ago, when returning from Cabo, I realized something. I had a new passport. And this was the first trip I used it on.

A new passport means a new passport number, and knowing how fast government systems work, I had a hunch while walking through the Global Entry line that my Global Entry profile had not been updated with this new number. Sure enough, when I scanned my new passport, I was denied.

The machine told me that I was not enrolled in Global Entry. Lies! My wife, at this point is now also enrolled, had already cleared the check, and was ready and waiting. What to do…

No way was I about to go to the back of the regular Customs line. It was certainly already long enough to be an hour or more of waiting before getting through, and there was no rollercoaster at the end of this line. Not my kind of fun. There had to be a way to prove I had Global Entry. Or…Mobile Passport. I checked, and Denver had it!

Since using it the first time, I got a new phone and needed to re-download the app. But from searching on the app store, to getting my approved code and strolling through with my wife, it literally took 4 minutes.

Anybody waiting in that line could have opened their phone and done the exact same thing. But most people don’t take the initiative to explore their options. They just use Safari or Internet Explorer—meaning they accept the default and follow the pack.

Don’t be a lemur at airport Customs. Do yourself a favor, download Mobile Passport, and breeze on through!

Why Global Entry is still (a little) better (for now)

The main reason you still probably want to go through the hassle of getting Global Entry is that not every United States port of entry is accepting Mobile Passport yet. Currently, it is in 24 airports and 1 cruise port.

For now, if you are a frequent international traveler, the process of getting Global Entry is still worth skipping all the Customs lines at the airports without Mobile Passport.

Also, many travel specific credit cards are now reimbursing the $100 Global Entry application fee as well. So if you’re in the market for a new card, which you always should be if you’re tracking hacking right and looking to capitalize on those signup bonuses, then you may as well look at the cards offering Global Entry.

My recommendation? Have both. I’m okay jumping a few extra hoops to make travel easier. Get Global Entry, which gets you TSA Pre-Check anyway, and that’s awesome. Then it takes nothing to download the free Mobile Passport app.

With Global Entry, TSA Pre, and Mobile Passport in your arsenal, you’re ready to breeze through airport hoopla. And someday soon, I imagine every airport will go the way of Mobile Passport, so you may as well stay ahead of the trend!

Exploring the Dolomites in 360 on the Wings of an Eagle

Learning To Deal With The Unexpected As A Novice Traveler Abroad