My face and neck are cold and covered in snow. Everything is dark, yet I know my eyes are open. What just happened?

I hear someone scream “Ryan!”, I recognize the voice but something’s not right. The only response I can utter is some sort of a half-audible moan, I’m hoping that whoever is calling me knows I am ok. I’m still conscious…I guess. 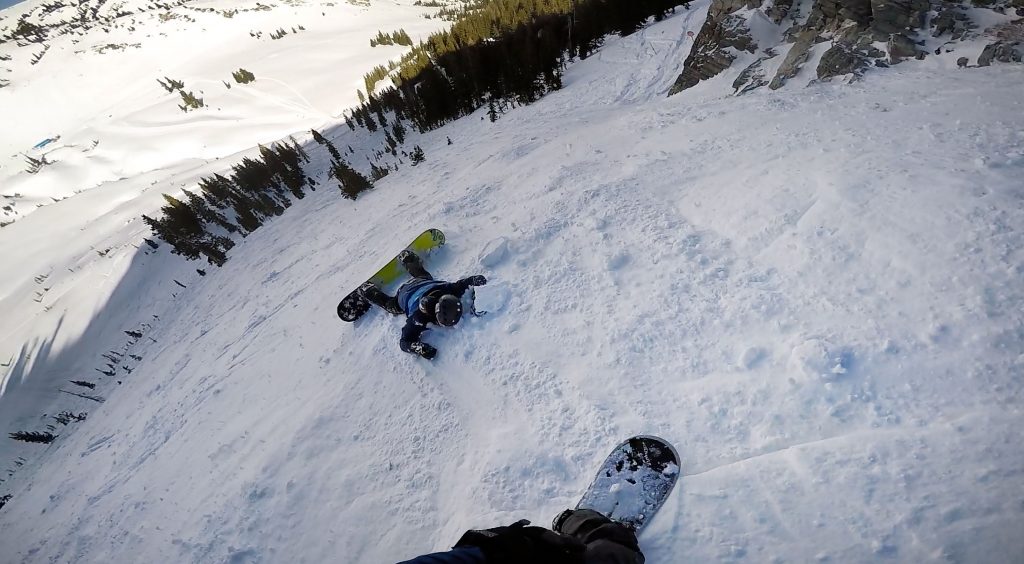 Snowbird Utah, a badass mountain in Little Cottonwood Canyon just 20 minutes from the great, and semi-misunderstood, Salt Lake City. The Mountain Collective Pass and an old friend from our Aspen days, Jon Skloven-Gill, brought Ronzio and me out for a long weekend back in the winter of 2016.

We packed all the gear. Boards for riding the Bird, splits and avy equipment for a dawn-patrol mission up the Mt Superior basin. Basically, everything you could need for 3 winters in UT, not just the 3 days that we stayed! But we had made it our objective that winter to pack the most we could into a long-weekend out west every month.

Snowbird is beautiful, the mountains are big, steep and snowy. Exactly what you expect out West. The sky’s a deep blue and seems to always be sunny. Utah is known for its snow, according to the state license plate it’s the “Greatest Snow on Earth”. I don’t want to argue but when you live 7 blocks from the gondola in Aspen for two seasons, you tend to ride the best days of your life. So, of course, my standards are high.

When we visited for our long weekend, the weather was perfect, except that there were no storms rolling in and we would be forced to ride nearly week-old packed powder. The groomed stuff, straight up corduroy in the mornings.

Don’t get me wrong it’s downright fun and a totally different experience. The speed and confidence I have on the board carving over freshly groomed cord is incredible but it still doesn’t touch the euphoria that overcomes me the morning of a big snowfall, and the adrenaline rush of big, steep, sketchy lines.

The three of us got off the red Snowbird Tram and looked around. The views are something that l miss, even as I write this. Big mountains, blue skis, white snow with rock bands scattering the peaks outside of the resort. The big lines that require that little extra effort. It’s all there waiting to be ridden. The only thing missing that day was the fresh snow.

We rode line after line, connecting the steepest in-bounds chutes and glades that we could. The level of riding that we just go out and do sometimes scares me when I look back at it. These lines are steep! There isn’t much room for error. A tree here, a cliff there, and plenty of rocks.

This should have opened up my eyes but my mind, as usual, was jaded by confidence and the need to make sure I ride the hardest and craziest lines that we could find. But really, that’s what keeps me going, I love the thrill of just making it through a tight line, and if I’m worried about crashing each inch of the line I choose I know I picked the right one. But it’s when I go down that I finally question these decisions.

With the desire to find the stashes and the will to try anything, we decided to ride out the Path to Paradise, a nice easy ride traversing the massive mountains around us. Riding Paradise, I know how it gots its name. On my toe side, I’m looking up at jagged peaks and on my heel side is ski trail after trail.

A funny thing happens on Path to Paradise. It starts out with quite a few people skiing and riding and as you continue on, people drop in on these never-ending serpentine trails through the rocks. But when you have the attitude and desire that my crew has, you go all the way to the end and see what you find.

Traversing and just barely dropping in elevation, we notice that the runs get skinnier and rockier, suddenly the crowds are gone.

Soon we begin to descend slightly and ride under the cliffs and some evergreens. Some of the runs below us are a cool 15 or so feet. This is just wide enough for full turns when scrubbing speed is crucial. Not too skinny, but more than enough to give the challenge that we were craving.

Out here, we found what we were searching for. No more corduroy, but an appetizer, some small stashes, of The Greatest Snow on Earth. It wasn’t deep or untouched by any means, but was still super nice and something we could lap all weekend!

Ronzio went first, without hesitation. The drop was smooth, he seemed to carve effortlessly through the wall of rock on each side of him. Jon followed-suit. He looked good, jumping into the slope with ease and riding fast but keeping the style flowing as usual. My friends’ enthusiasm and those incredible views got to me and I was ready to drop in.

Heart pumping and with a camera in my front hand, I strapped in, took a deep breath and jumped into the abyss. I naturally sunk my heels into the snow and pushed the board to the left wall slowing my speed just enough. I linked into my next turn leaning to the right and pushing into the slope. I continued to ride down, towards the cliff band on my right.

All of the sudden I felt off, and then, I clipped a rock. After a stumble, the nose of the board acted like a submarine and went under the snow. Like the Titanic hitting an iceberg, this screamed nothing but horror in my mind. Nails on the chalkboard of terror is all I remember.

With no way to recover balance, my body began to fly forward out of the snow and I started somersaulting towards a massive wall of sharp jagged shale and quartz. My mind was already spinning through my options but as I flew through the air it was so clear that I had no way to change my trajectory.

Gravity was now in charge of what would happen to me. Before I knew it I was upside down and the back of my head slammed into the rock. I somersaulted and slid face first down the remaining slope of this perfect, powdery chute in the Bookends. My body lay limp. 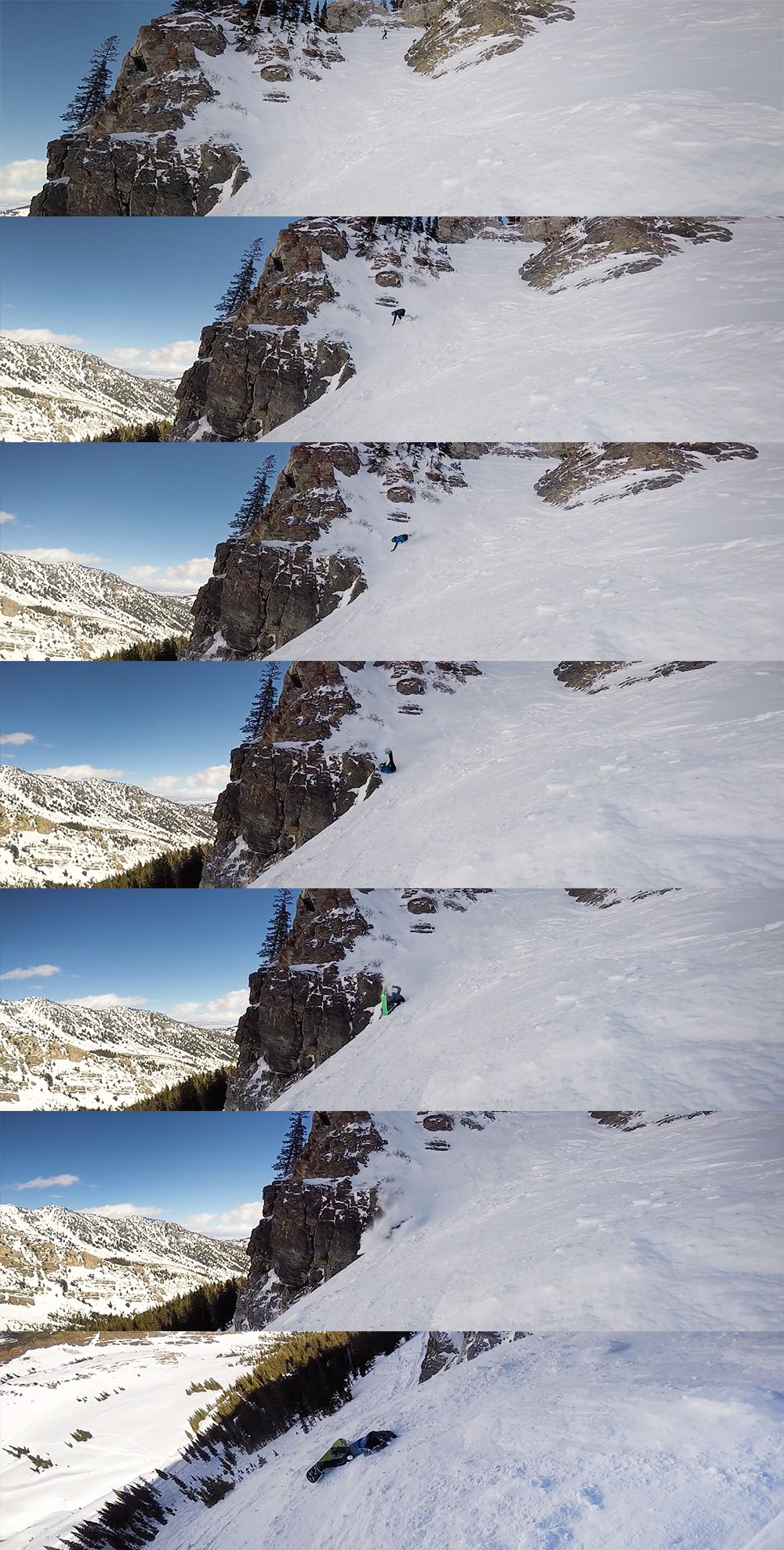 “Ryan!” I hear being shouted through the valley. I do my best to respond but it’s no use. If anything, only a slight guttural moan made it out of my mouth as I try to lift my head. But I can’t even hold my head up, I drop it back into the soft snow in excruciating pain.

I hurt everywhere. I can feel the blood pulsing through my back and straight into my dizzy head.  I lay still just trying to breath easy and stay awake. I am powerless.

Once again I try to speak to my friends and still can’t say anything. I decide to move my hand to let them know I hear them and that I am OK, kind of. Over and over I try to lift my head but just need to stop and rest, the pain is too much.

“I’m okay,” I finally get out. My back still feels like I got hit by a train but I begin to roll over so my face isn’t in the snow. I start to think back and realize that I don’t really remember what happened in the air. Was it too fast or did I get a mild concussion? I am not sure but probably a combination of both. I still don’t feel right but at least I’m moving and able to talk.

The guys are right there helping to get my pack and helmet off, asking what hurts and making sure that I’m going to get out of this valley. They tell me just to rest, lay there and stay still for a few minutes. They say I hit the wall hard and I am lucky to be moving at all.

I’ve been laying at the base of the chute for a while now, and finally start sitting up, albeit very slowly.

I take a look at my helmet and there is a massive dent on the back, about half an inch above the base of the helmet. If I hit the wall just an inch lower on my body I would have slammed my neck possibly fracturing it or maybe even breaking the spinal cord. And thankfully, I had only hit the edge, a very small protrusion of the larger wall. Any more to the right, and I don’t want to think about it.

Also, if I wasn’t wearing my helmet, there’s no doubt in my mind that best case scenario would have been a hole in the back of my head, while worst case and not at all out of the question, is that could have been my last few moments. Brains are fragile and rocks are hard.

I have worn a helmet while snowboarding since my first season on the board. There were, of course, times when I didn’t want to wear it, when I was at a small mountain and didn’t think it was worth it, but I can tell you that it is, especially after this experience.

You never know when or how a crash might happen. It’s possible to catch an edge on the bunny slope, miss the landing on a jump or hit a tree or wall of rock on a steep slope. That helmet saved my life and I will continue to wear it for all of my skiing, snowboarding, biking and climbing adventures because falls are unpredictable and there’s so reason not to strap it on!

Side note: The Smith Variant is now the Smith Variance. This helmet likely saved my life, and for that, I can’t recommend it more. Get one.

Why You Should ALWAYS Buy Travel Insurance

Surf, Snow, And The Essence of Passion: Jeremy Jones’ Life of Glide

A Dirtbag Voyage to Banff and Moraine Lake on Splitboards