In the center of the state more known for its history than its innovation, there is a food revolution brewing that might be one of the most important in modern America. Real food. Real wine. Real foodie farm-to-fork culture. This is Foodie Fate: Charlottesville.

Many Americans by now have heard of Polyface Farms – made famous through Michael Pollan’s must-read book, The Omnivores Dilemma. Polyface has been the symbol of the now booming, ‘un-conventional’ farming community for 30 years now. Shunning cruel and unhealthy animal living conditions, and saying no to Big Chemical’s plan to essentially own farmers and their seeds.

By turning their back to ‘conventional’ thought back in the 1980’s, they had to look to generations past for a new (old) way to farm. Creating an entire ecosystem with plant and animal bio-diversity that balances itself without the use of chemical or mechanical interventions. A farm with many faces… Poly-Face.

Sometimes it takes one family, such as Polyface’s Salatins, to show everyone else that the impossible is actually possible. Seeing the success of this innovative approach to farming, the central Virginia community began spawning new small, family owned farms, following the same style of business as their trailblazer.

Farming is food, and this type of farming creates nutrient dense (and thus way tastier) REAL food! A community that pours endless energy into a farming revolution, needs a restaurant community that embraces this same philosophy – and Charlottesville stepped up to the plate.

Your next real food weekend getaway is to to central Virginia wine country. Charlottesville.

Charlottesville, or Cville as the millennials say, is a pretty trendy spot for only housing 50,000 people year-round. Exploring by bike for a day is probably your most fun bet.

In the morning head over to Blue Ridge Cyclery where you can rent your bike for the day and grab a locally crafted snack for the road, next door at the Juice Laundry. 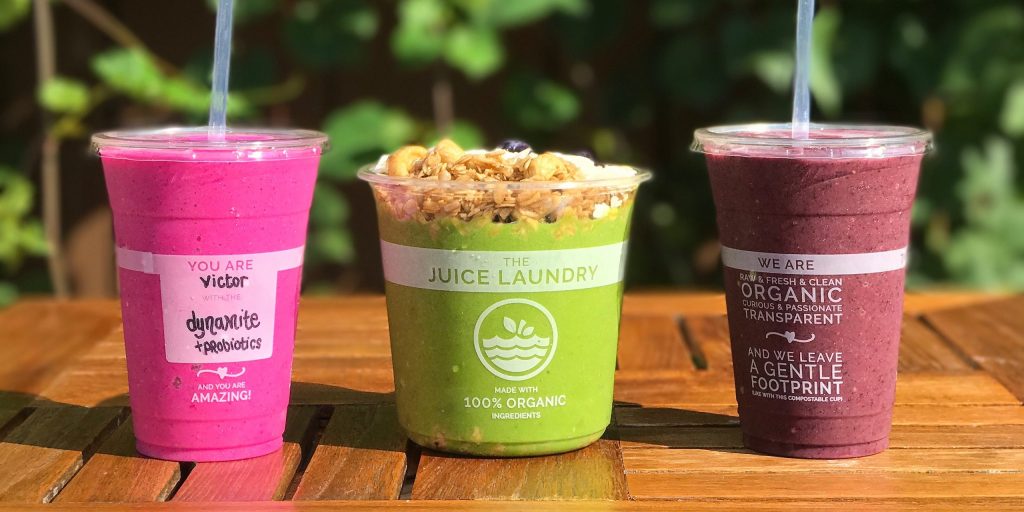 Obviously at their scale of business they’re not making juice out of local produce, but what you can find are these amazing to-go treats from famed Charlottesville producer Moon Maiden. They’re gluten free, sprouted, and packed with good fats for endless energy on your bike ride.

Your first edible stop for the day should be the very hip Neapolitan pizza joint, Lampo. 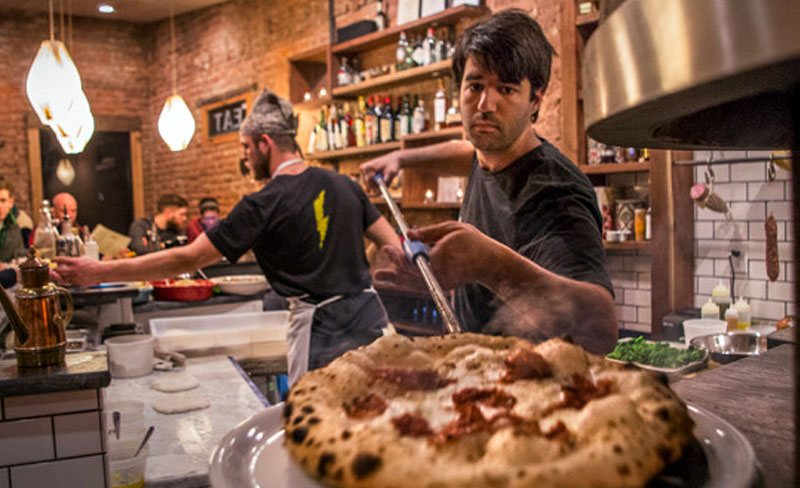 This is a truly authentic, central-Italian pizza establishment. But don’t get too distracted by the pizza scissors and miss all the astounding finds on the specials menu. These guys know how to work with vegetables and they source their specials menu almost exclusively from what is coming in the door that week from the local farms.

Pro Eater Tip – ask for the secret wine menu to find some natural wine gems at prices for everyone.

Some spots you’ll want to hit on your bike ride are:

When your appetite comes pedaling back to you, head over to the hippest of the hipster spots in town, Oakhart Social. 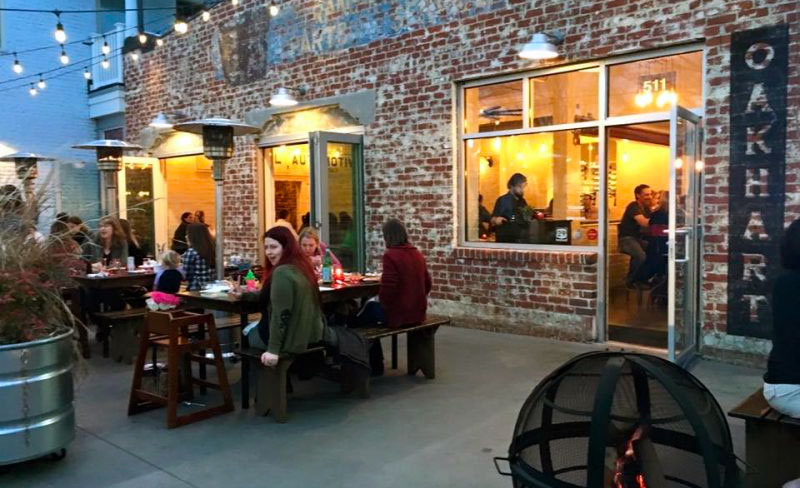 The plethora of hoodies and beards are nicely accented with ladies and gents in suit jackets fresh out of the office life – everyone here for some of the freshest food around. Another joint that knows how to makes vegetables the centerpiece of the meal.

Do not miss the shaved salad with buttermilk dressing or the BBQ mushrooms and grits.  If you want to fit in, drink cocktails here, not wine.

Pro Eater Tip – Ask for Chef Todd and then tell him that Hitchhiker Jeff D. sent you there… maybe he’ll hook you up with some of his famous ‘Hipster Toast’.

Charlottesville may be called a city, but to those of us who hail from places like Boston or New York, it feels like the cute random town you drive through on your way ‘upstate’. This is a good thing, because what makes Cville an amazing place to live is what surrounds the city.

Drop your bike off at the shop and head a few streets over to Feast!

Here you’ll find everything you need for your picnic. There’s plenty of high-class, high-priced candies and crackers, but if you find your way over to the cheese counter, you can have a conversation with one of the country’s leading experts on fromage, Sara Adduci – placing 3rd this past year in the largest cheesemonger competition in the U.S.A.

Grab some fresh chevre from Caramont farms, or even better a cave aged cow/sheep/goat cheese from local newcomer Twenty Paces. With names like “Noah’s Arcade” and “I Don’t Even Own a Gun”, their cheese is as esoteric as their names.

Some of the wineries you’ll want to visit for the day are Stinson, Ankida Ridge (make an appointment!), and new arrival fall of 2018, Ramiiisol. As you head out west on Route 64 in search of your vineyard picnic spot, make sure to stop along the ridgeline and overlook the Monticello AVA to the south, and Shenandoah National Park to the north.

By day’s end you should find yourself in Staunton, about 25 minutes from Charlottesville as the speeder drives. You want your day to end in Staunton because the culinary gem of your Cville adventure lives here.

The Shack is a creative powerhouse that harnesses the seasonal bounty of central Virginia and turns them into dishes that are half 1800’s Appalachian and half 2200’s futuristic art pieces. Get anything with schmaltz, and do yourself a big favor and order at least one hand made pasta dish. Chef Ian’s pasta has a rich texture that only your great, great Tuscan grandmother might have been able to match. 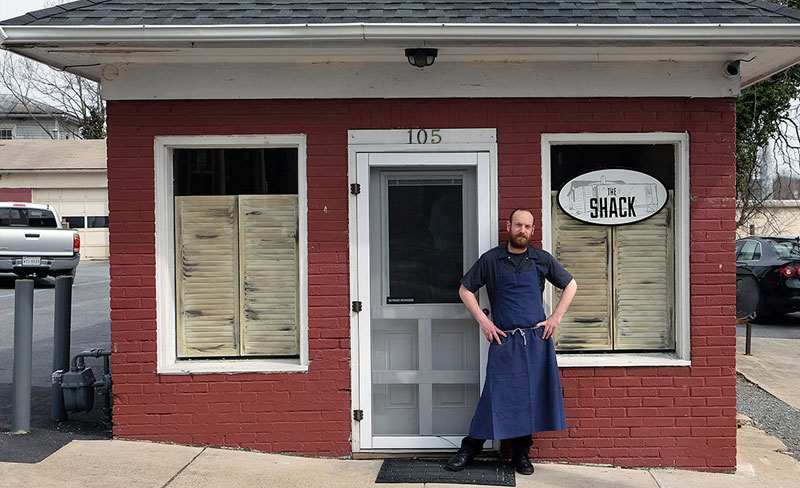 One last thing – if the bourbon apple fry pie with warm thyme custard is on the dessert menu, order three for you and one for the table next to you. It was the greatest thing I ate in the 2016 and 2017.

Pro Eater Tip – make a reservation, this place is as small as the name suggests.

The reality of the current farm-to-table movement is that IT IS DIFFICULT to source 80-100% of what you use, locally, and still stay relevant as a restaurant.

It takes serious craft and ingenuity on the part of the chef, as well as an owner with a true conscious. Thus, most farm-to-table restaurants are mere marketing. But there are a few that stand alone at the top of the pack for pouring their heart and soul into cooking as seasonally as possible.

In Charlottesville, that restaurant is Back 40. 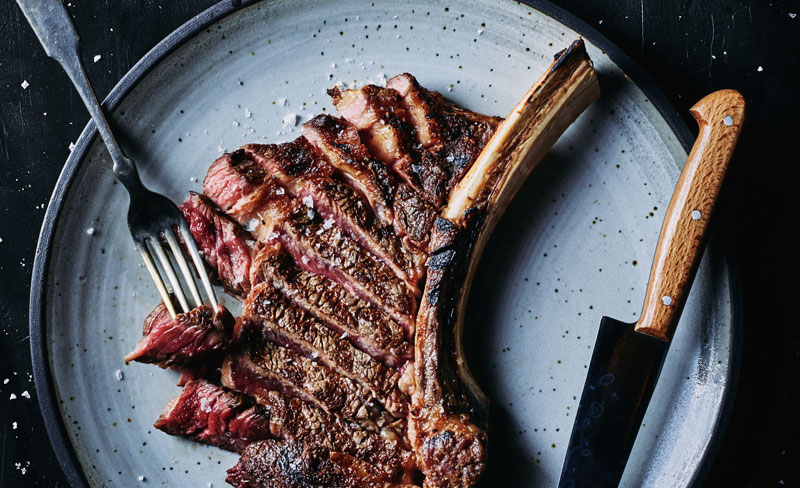 The name is a throwback to the 1860’s Homestead Acts which parceled out farmland in sections of 40 acres. A fitting name for a restaurant that is owned by longtime local farm, Timbercreek.

Chef Tucker is the king of savory and homey flavors. Tallow fried, Korean spiced, duck wings are a great example and something not to be missed. His homemade sourdough bread brings you back to an earlier time in American life. The wide variety of pickled and preserved vegetables and herbs play a vital role in brightening up each dish, without the use of tropical fruits such as lemons, limes, and oranges.

The vibe is like eating at home (if your parents have an eye for country design), and service is as personable as your local diner. Don’t overlook the cocktails, as this is one of the few who use fruits and vegetables, both pickled and cooked to spruce up their drinks, which put them neck and neck with wine as avid contenders for the meals best pairing.

Pro Eater Tip – Show up midday and order lunch at the Timbercreek Market attached… and then nap in the sun on the porch until Back 40 opens up for dinner. 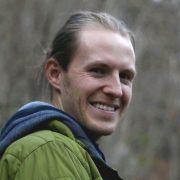 Jeff "Hitchhiker Jeff" Dion is the founder of all-inclusive East Coast wine adventure provider, Discover The East, and a regular columnist at Vogue. But not really.