I love taking long weekends to explore new cities. And my favorite thing to do in new cities, is go out on a Foodie Fate tour!

The Rules of Foodie Fate:

The purpose of this San Diego trip wasn’t just a random getaway. It was actually my Mom’s birthday weekend and my brother, Chris, and I decided to take her away somewhere. Each year we try to give this gift of time to both our Mom and Dad. We looked at a map of where Southwest flies and said, “pick a spot!” San Diego it was.

My brother is out in Phoenix (we did Foodie Fate there too!) so the trek was nothing for him, but for my mom and I coming from Boston, it was a decently long day of travel starting at 3am. When we got to our hotel though (Andaz by Hyatt in San Diego’s Gaslamp Quarter), things started off on the right foot. Both of our rooms had welcome buckets of assorted San Diego IPA’s on ice! Nice touch Andaz.

After dropping our bags and grabbing a beer, we kicked this off.

Venturing to the elevator and up to the roof level of the Andaz, we found Rooftop by STK, and decided to have a late lunch snack.

Order up! A round of margaritas please. We also split, and quickly devoured, the Tuna Poke, and Mom got the Baby Kale Caesar. Next!

Rustic Root was next up. A short walk down the street in the Gaslamp Quarter (where there are literally a thousand incredible restaurants to eat and drink) we found the place. Rustic Root had a very cool modern American bar vibe with brick walls galore. We didn’t explore upstairs, but I guess they have a rooftop as well, with its own menu.

Downstairs, Mom and I both ordered the Rustic Pasta Primavera. It was a good sized, delicious, portion of pappardelle noodles and veggies with a roasted red bell pepper cream sauce. Big bro ordered the Wild Boar Bolognese, which did look awesome, but unfortunately they messed up the no dairy (allergy) request. The manager came right over and felt so bad about it that he instead sent their Table Smoked Tomahawk over—a $55, 16 oz. prime bone-in ribeye—and they comped it completely!

By this point we had already filled up, and from all the travel, drinks, and food, we just needed to call it a night and get some rest.

We didn’t have much of a plan for our time in San Diego, and that’s why Foodie Fate was perfect, but for our first full day we knew we wanted to stroll on over to Seaport Village on the harbor. First though, we just went back up to the Andaz rooftop for coffee and to hang by the pool.

On the way to Seaport Village, we passed Cafe 222. It was the Belgium waffles that first caught my eye but I would end up ordering the Mexican Scramble.

We got there right before the crowds came and it was obvious this was a popular spot. Really a cool little diner you have to try! The day continued…

After reaching Seaport Village, we decided to walk along the bay. There were kids playing with bubbles in the green spaces beside the water. There were kites, jet skis, sail boats, and fish markets. And, coincidentally, it happened to be Veterans Day when we’d gaze upon the flag hoisted high over all the festivities aboard the USS Midway Museum and the statue of The Embrace. We lucked out with our timing. All that walking though had worked up yet another appetite and Sally’s Fish House + Bar would be the spot.

We grabbed a table on the outdoor patio, overlooking the marina. A couple beers would quench the thirst well, and then Mom ordered the Baja Cobb Salad with seared scallops and prawns, Chris went for the Jerk Spiced Fish Tacos, and I chose the Socal Soft Shell Crab Club with king crab salad. It was outrageous. 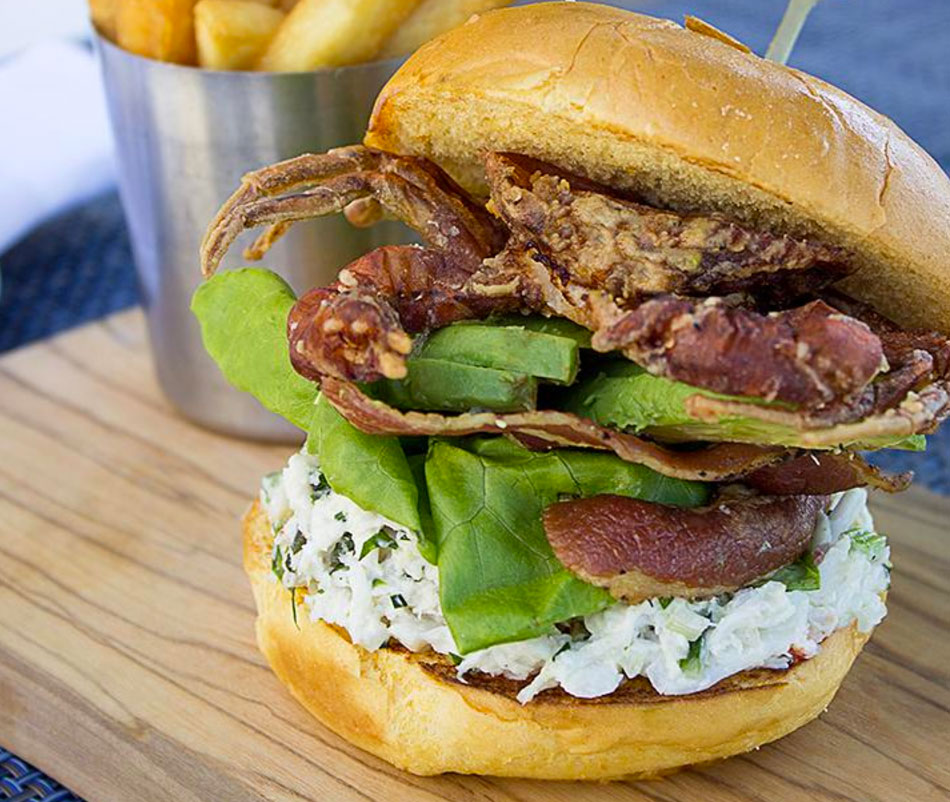 We had been breaking the Foodie Fate rules of only ordering a drink and an app the moving on, but the food all sounded way too good at these places! And for Mom’s birthday weekend, we were being a bit indulgent. To that tune, we even ordered the Dark Chocolate Sphere on the pistachio blondie. Oops.

Having eaten so much already, we were totally still going to the next place for dinner, but we would save our real Foodie Fate (bar hopping) efforts for the following day. Still, the next place, BIGA, was a real gem.

Biga is a type of pre fermentation bread starter popular in Italian baking. It’s also a restaurant serving handcrafted Italian cuisine in the Gaslamp Quarter you have to try!

The pizzas are all wood-fired and the menu is seasonal and local, or what’s not local is a high-quality Italian import. We got a couple glasses of nice Italian wine, (I believe a Primativo and a Cotes du Rhone) and then split the Sausage and Pepper pizza and the Truffle Decadence.

How decadent was the truffle decadence? In addition to loads of truffle cream and truffle oil on this white pizza, there are literally 24-carat gold flakes on it. I’m not sure why, other than being buzz-worthy, but that, it certainly is. And it was delicious!

Also a good spot to stop for a crescent and a coffee, or some gelato! At this point though, like I said, we were calling it a night… and passing out watching She’s All That in the hotel room. It was a good 90’s nostalgia fest, don’t judge.

Here is when we would kick Foodie Fate into high gear and get real with how we were playing this game! First up, Garage! Well actually the first stop was Starbucks because Garage doesn’t have an espresso maker and Mom needed some espresso that she could dump a shot of Baileys in once we sat down at Garage! I like her style…

Garage Kitchen + Bar was the perfect brunch place to start the day. It looks like it could have been an old firehouse, or maybe an autobody shop a long time ago (in which I guess the name Garage makes total sense), but the atmosphere here is so cool. All brick. High ceilings. Actually no front door, just literally a garage door that opens behind a brick archway.

We got coffees, while Mom was happy with her Baileys cappuccino. Chris ordered the Going Back to Cali omelet which, you guessed it, isn’t shy on avocado, and Mom had the Steel Cut Oatmeal. I wanted something light to start the day, know we’d have a lot of places in front of us. With that in mind I went for the Creme Brulee French Toast with Nutella Mousse and Berries. 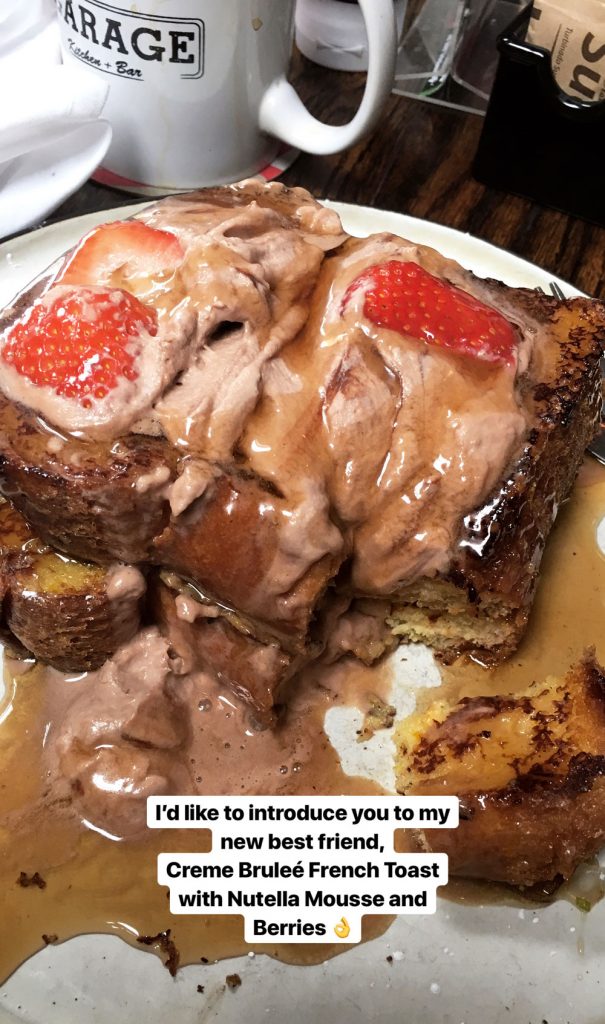 I’m obviously not an a diet…

We decided top open up the geographical parameters a little here and do some exploring. The first stop was Balboa Park, which everyone talked about but I kind of expected to be just a nice green space to walk around. It was so much more. We strolled through museums, an art festival, and a bunch of really incredible gardens. The architecture of al the buildings in the Balboa Park complex is enough reason to go check it out. But then we would hop an Uber out to Pacific Beach, and the Pacific Beach Ale House. 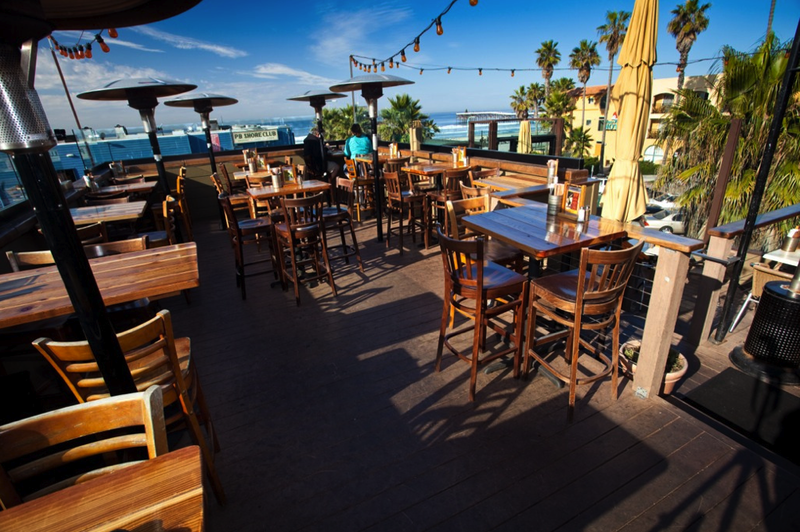 It was time for beers and ceviche, and I was really craving some fish tacos. So I got the Grilled Fish Tacos, and they were some of the best I’ve ever had.

Even that side dish, the black bean and corn skillet was just outrageously good. Mom got the mussels app and bro went for the Ahi Tuna sandwich.

After walking the beach from Pacific Beach to Mission Beach, and obviously riding the wooden rollercoaster there, we were off to our next destination.

At La Puerta, we kicked into high gear. It was Happy Hour and we started with three Whole Lotta Love margaritas. 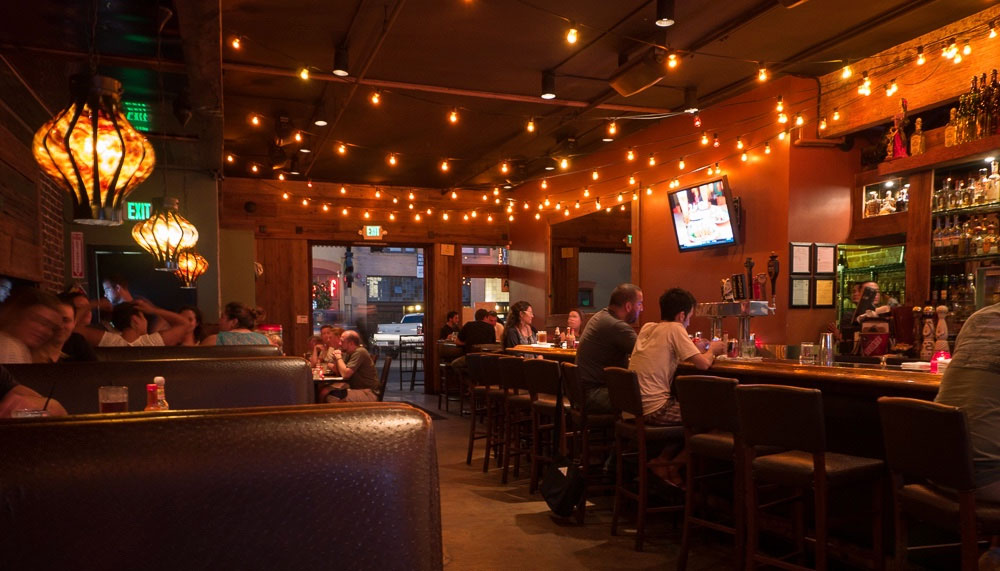 It’s a good thing these drinks were half price because the next place would be a bit pricier, and for good reason. So Bartender, where are we headed?

The Whiskey House is quite literally the home of whiskey. Over 2,500 types to be exact. 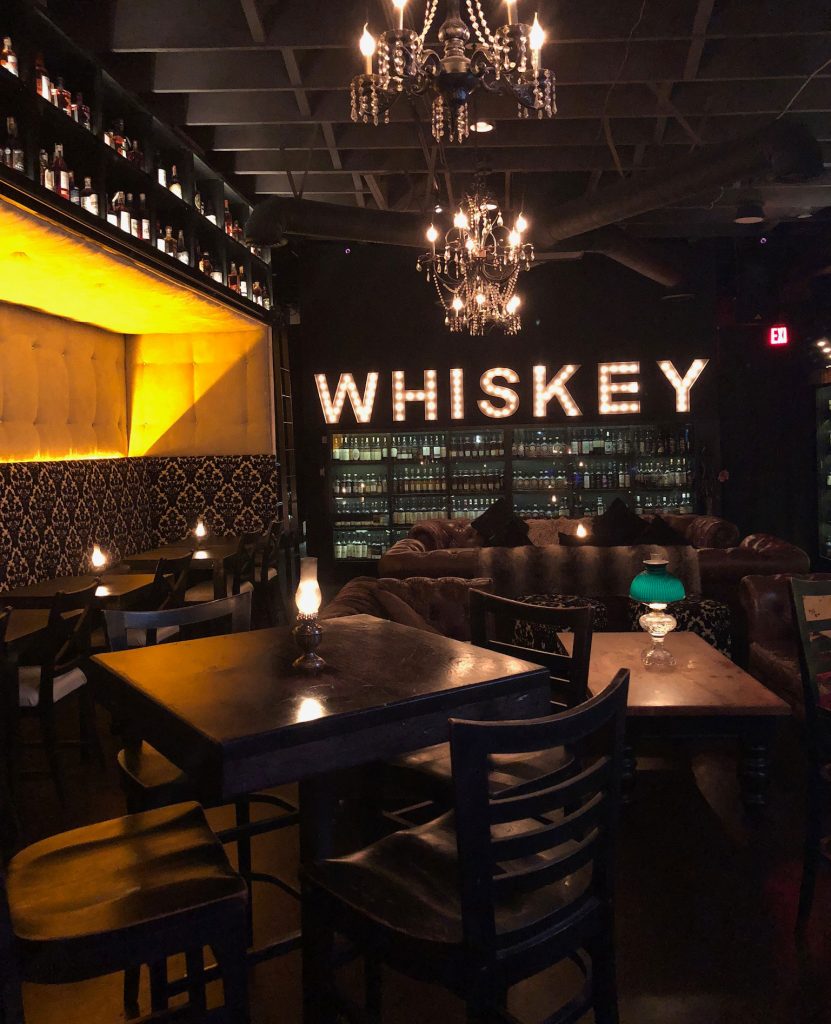 We grabbed a seat at the couches in the lounge, surrounded by an awe-inspiring selection of my favorite liquor, and took way too long to order! Decisions, decisions… 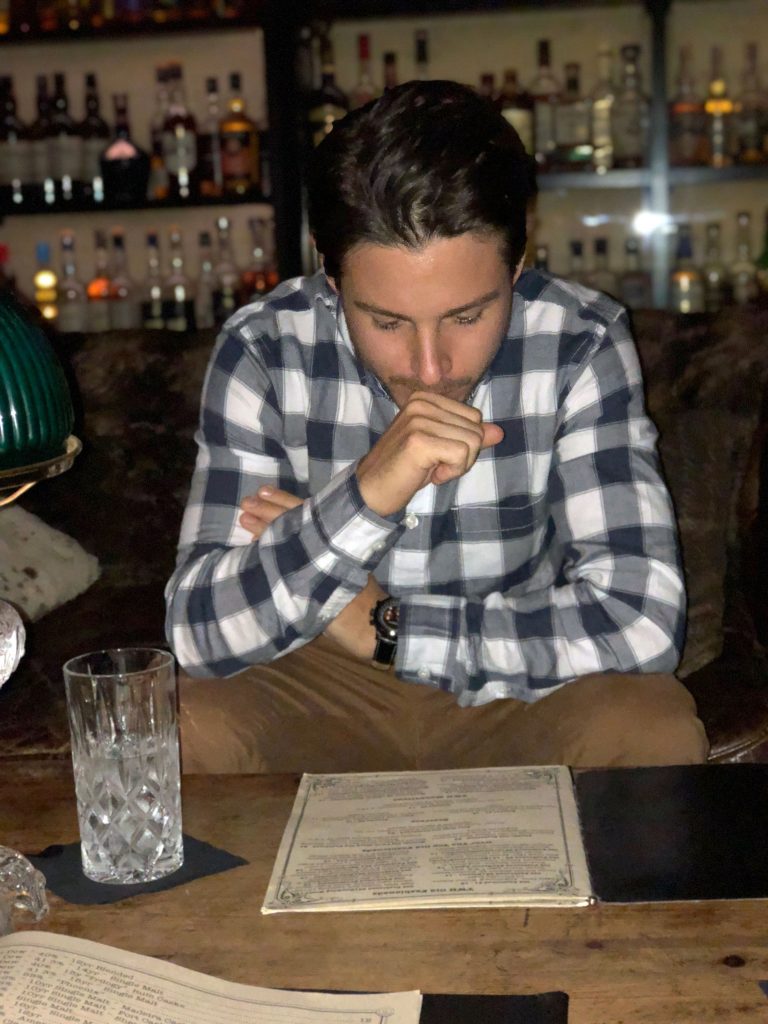 I’m not sure I’d spend the $24 to order this one again, but it was a damn good old fashioned none-the-less. And I’m glass I tried it. If you couldn’t tell from my pizza selection at BIGA, I’m a huge truffle fan, and Basil Hayden’s is one of my favorite bourbons. I accompanied this drink with a cheese board featuring the cabra al vino (a Spanish goat cheese cured in wine), and a picorino toscana from Italy.

My brother ordered the Next Door Findings cocktail, which was a Chamomile Infused Knob Creek with Fuji Apples, Pineapple & Lime Juice, and Cinnamon Bark Syrup. And also the Sweet Italian Sausage. Mom got the Cauliflower Gratin and some sort of St. Germaine, Mint, Vodka mix (I forget the name). Time to go…

Our server told us we were going to Prohibition Lounge next and away we went. She also mentioned that you could walk by it 4 times and not realize it, which is true, so if you’re going just know that it is downstairs, sandwiched between El Chingon and The Field Irish Pub on Fifth Ave. There will be a bouncer. 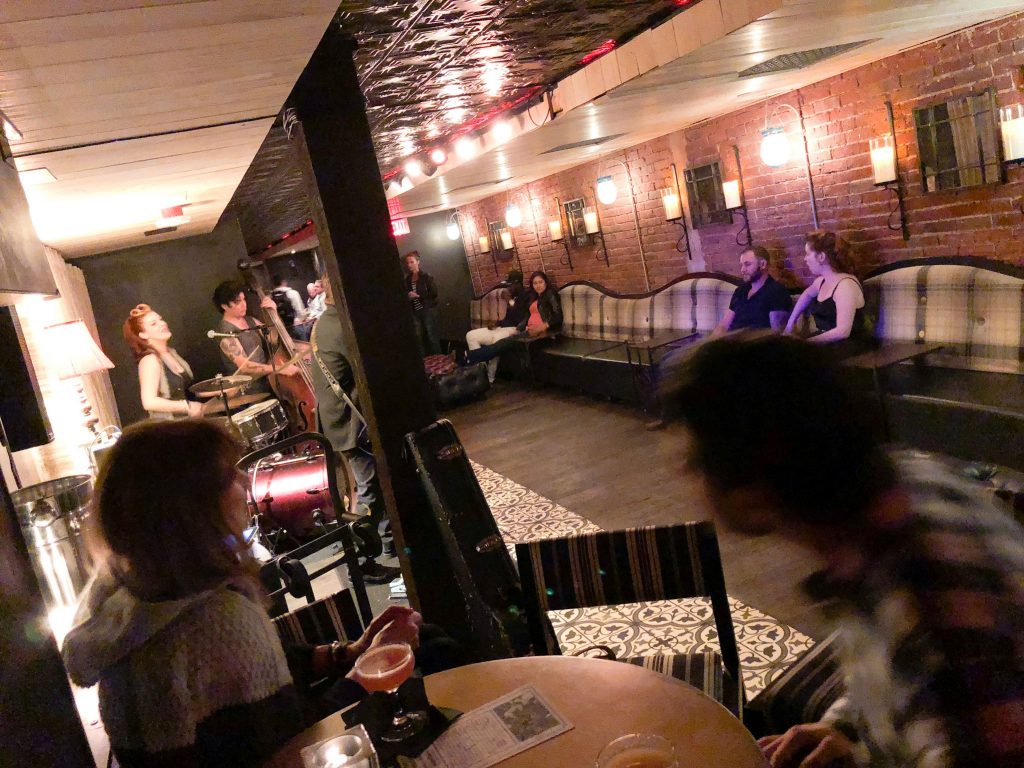 Downstairs is a stylish little speakeasy with live music and good drinks. I’m not even sure what drinks we all ordered here actually, I was just more focused on the awesome band and the obvious groupie swing dancers! So cool. My wife and I took one dance lesson before our wedding and now I’m definitely inspired to try more.

I saw this place the first time we walked out of the Andaz. It’s just across the street. And man am I glad someone recommended it! Coin Op is a “barcade” stocked with everything you need to have the best time ever. And that’s exactly what we had.

My mom was cracking up, feeling like it was 20 years ago and she was watching my brother and I compete at skee-ball, basketball shootouts, snowmobile racing, even Dance Dance Revolution. All of which, I won…sorry bro!

After working up a sweat at Coin Op, that would be it for Foodie Fate: San Diego and we would retreat to the hotel to get packed and ready to head off in the morning!

I stand by that this is the absolute best way to explore an area, meet cool people, try the best local spots, and gorge yourself on awesome food and drink. Servers always love this game too. They really get a kick out of you putting trust in them and their recommendation and so they want to make sure you’re going to have a great time.

Give it a go and stay tuned for the next Foodie Fate!

Donut Bar – Friday and Saturdays are for Donuts + Beer pairings. I mean, c’mon

Have you been to one of these places, or know of others in the area readers should check out? Comment below!

Also, if you give Foodie Fate a try, shoot me an email (jonathan@exploreinspired.com) and tell me how it went! I’d love to feature your story in the Foodie Fate series for a city I haven’t hit yet!

Don't Let The Short Dark Days Keep You Inside