A chance meeting at the Patagonia Outlet in Reno, NV, led to the discovery of the lightest and warmest base layer I’ve ever worn. I’m talking about the Patagonia Merino Air Hoody.

My wife and I pulled off the road for a quick stop on our way to Squaw Valley because, well, there was a Patagonia outlet, that’s why. I was going to be racing in the Lake Tahoe Spartan Race World Championships the next day and the race gear I packed just wasn’t going to cut it for the dip in forecasted temperatures. I needed to find a couple extra layers.

While browsing through the racks and buckets, I bumped into a fellow Spartan. He would be racing on Sunday and was in the same spot, looking for layers that he had back home but neglected to pack. He held the Merino Air Hoody in his hand, but it was a size too small.

We chatted for a while about what to expect of the coming race, how we both got into the OCR scene, and what other mountain and outdoor sports we were into, and at the end of that conversation, he says I should give the Air Hoody a shot. He claims that it’s his favorite base layer for chilly trail running and would probably be just what I needed. Also, fortunately, it was my size. 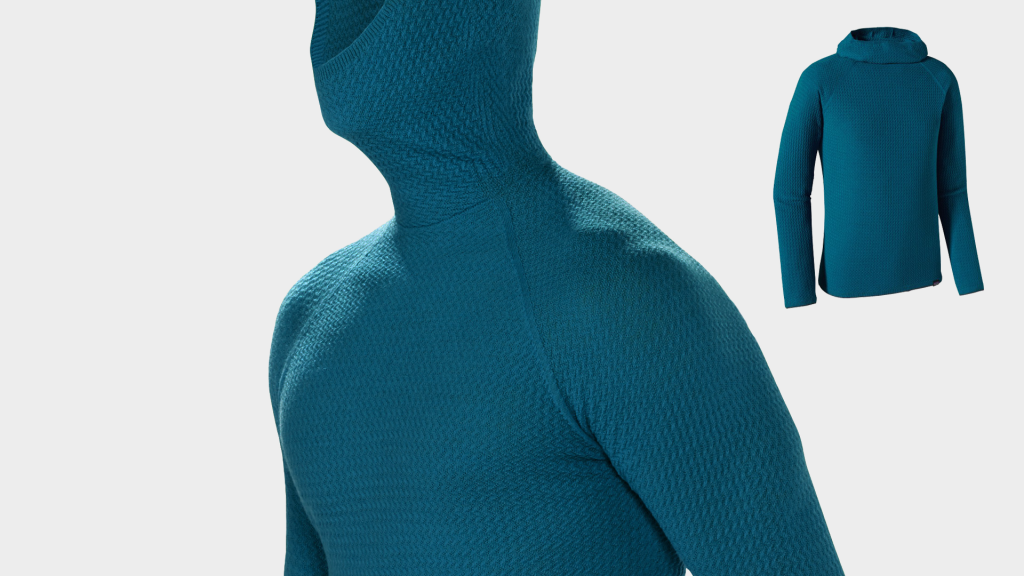 On his recommendation, this Patagonia performance top I’d never heard of prior, walked out the door with my me. The next day, all 175 grams of it sat secure in my Ultimate Direction AK Mountain Vest 3.0, rolled and bagged in a Ziplock to stay dry until I needed it.

By the way, that UD running vest? It’s just stellar. I use that on most trail runs and in any Spartan or obstacle race longer than 8 miles to pack in water, layers or a rain shell, snacks and gels, my phone, etc. It fits a hydration bladder but I usually just stick with the Ultimate Direction Body Bottles on front. And even with all that stuff, it’s a slim enough little pack that I can still barrel roll under the barbed wire no problem. Great gear. But back to the base layer! 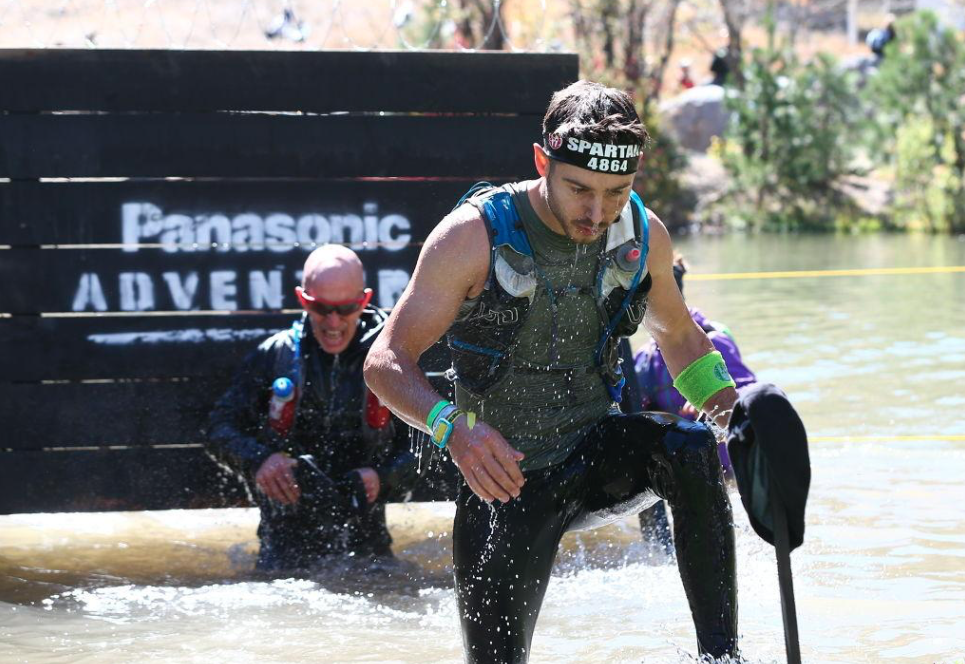 More than halfway through the 13-mile course was an obstacle all the racers were clamoring about with anticipatory fear. An alpine lake at 10,000ft that was reportedly just warmer than 40 degrees. My plan of action was to get through that swim, get out of the wet clothes, and into my new wool base layer. And that’s exactly what happened.

While in that water, I didn’t feel all that cold. I could certainly feel my body slowing down but the worst of it hit once I got out and started moving again. I don’t want to be so dramatic as saying the Merino Air Hoody saved my life, but it certainly felt that way when my body was uncontrollably convulsing and chattering as I continued on my way toward the next obstacle and the back third of the race.

Despite the discomfort of my thawing body and racing heart, I couldn’t help but be impressed with this hoody! Seriously, it felt like I was wearing nothing at all. Or better than nothing, a thunder cloud after a summer lightning storm. Warm and dense but light and airy at the same time. I was back to life and back to the race in a fraction of the time as others. Some I saw even had space blankets and were needing to stop to recover.

FROM SPARTAN TO SPLITBOARDING

I should have written this post then, right after my first experience. But obviously, I did not. The reason I came back to it now is because I had another mind-blowing experience with the awesomeness of the Merino Air Hoody just the other weekend. My last post on splitboarding Tuckerman’s Ravine, I mention that temperatures topped out at 1 degree (F) for the day. And with windchill in the bowl, it was a bit nippy!

My top layers for that day in the unforgiving White Mountain backcountry were this: 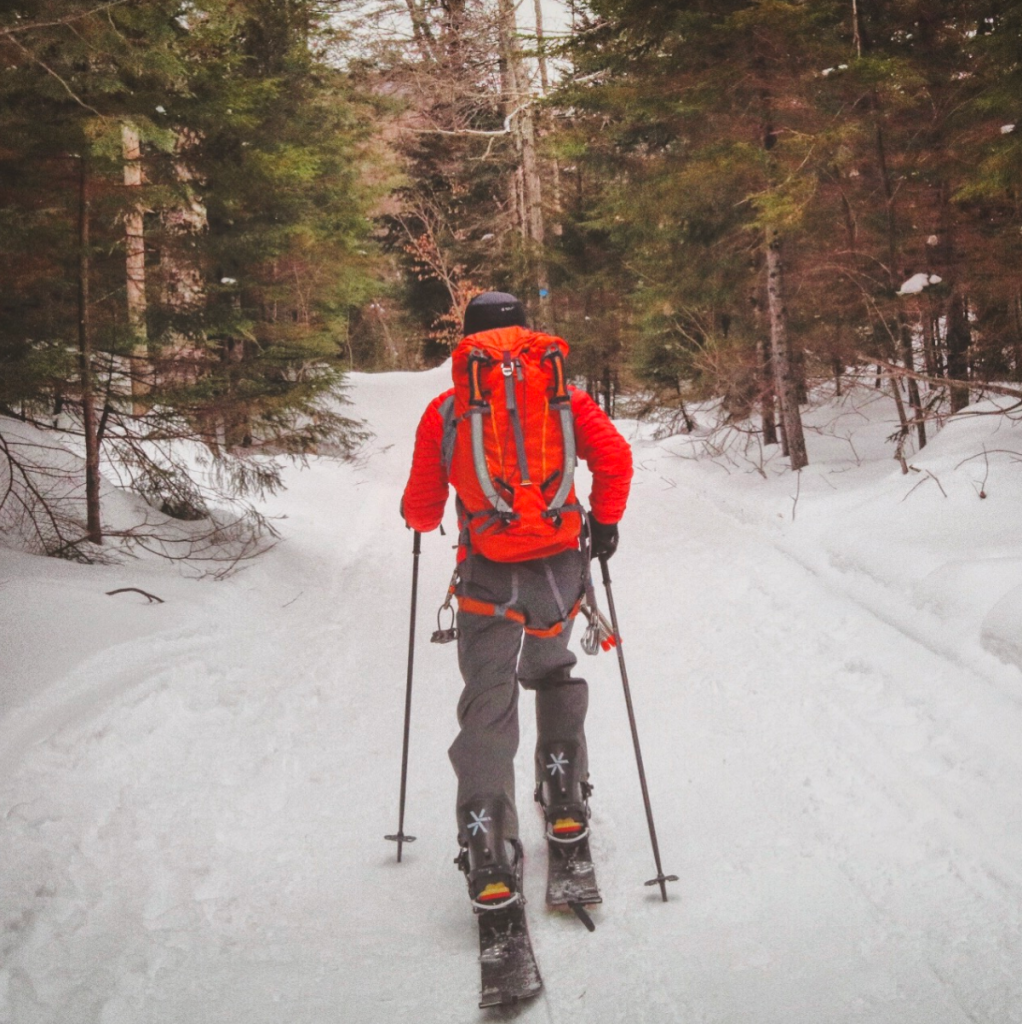 That was it! Well, I did put on a shell (Black Diamond Front Point Shell) for the wind during the snowboard descent. But for the majority of this day trekking and climbing around Mount Washington in subzero temps, the Air Hoody, and a thin down zip up were it. Again, I was beyond impressed with the insulation skills yet mobility and insane weightlessness of this wool layer.

Wool is usually not my go-to. I generally don’t like the feel of it and prefer synthetic performance layers. But that changed with this piece. Reason being is it just doesn’t feel like wool. Here’s what Patagonia has to say about how it’s made:

“The wool for each garment is…treated using an innovative air-jet process that creates yarn of greater loft and insulation value than conventionally spun wool. Using a computerized knitting machine, the lofted wool and 100% recycled-polyester yarns are knit directly into a seamless performance fit garment with minimal waste.”

Or as Outside Magazine puts it, “the company uses a high-pressure air gun to magically boost the wool’s thickness and warmth without having to add more material. That means you get a toasty base layer that’s lightweight and super breathable.”

Also, fear not eco-friendly friends, this is Patagonia. The wool used in this layer is sustainably sourced from the grasslands of Argentina, and the polyester in their patented Capilene® fiber is 100% recycled.

The Patagonia Merino Air Hoody has my most sincere vote of approval after keeping me warm and dry in two pretty intense situations, among other cold morning runs. I just realized they have bottoms with this material too… they’re in my cart now!

A Guide to All The Knots You Need to Know

My Love Affair With The Patagonia Ascensionist Pack