9:30 AM, maybe 10:00 AM. That’s the time each day that I inevitably set my imagination loose on some adventure that’s a little bit above my experience level.

With my second cup of coffee in hand, I ask myself questions that lead to excessive Googling. Could I feasibly climb Denali next year and, if so, how would I do it? Start researching flights to Kahiltna glacier… If I were to climb the Nose, how much more gear would I need? Immediately look up price of a portaledge… How many people have died skiing Tuckerman’s Ravine? Check Mount Washington Avalanche Center Forecast…

One morning, however, I distinctly remember sitting at my cubicle in Cambridge, Massachusetts, sifting through Mountain Project entries as I am known to do. Navigating to the page on Mt. Washington, New Hampshire, I spied a route called “The Pinnacle”: 900 feet, 7 pitches, 5.8, “considerable exposure.” 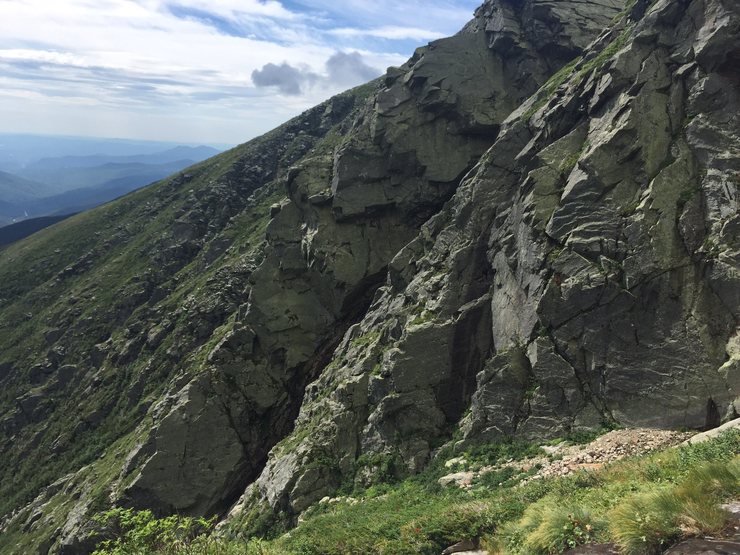 Now, “considerable exposure” can mean different things to different people, but 500 feet up the side of the Pinnacle on Mt. Washington’s Huntington Ravine, it meant a rich mixture of fear and excitement. I liked the sound of that and immediately reached out to a coworker to see if he wanted to do it. Of course, he obliged. And just like that, a random caffeine-infused Google session had suddenly become a very attainable goal to be achieved as soon as possible.

The Pinnacle is one of New Hampshire’s most famous alpine rock climbing routes. Despite its popularity, it is a commitment, requiring a two-hour hike to the base of the climb followed by a knee-breaking jaunt down the larger and longer Tuckerman Ravine.

The route also suffers from some of the worst weather in America, occasionally snowing in the summer. Couple this with a route that offers little to no protection from the elements and a rainy forecast in the low 40s, one thing was clear: we indeed would experience considerable exposure.

On the day of the ascent, we got an alpine start, and began our approach up to the base of the Pinnacle, trad gear clinking all the way. Hiking up the ravine, we joked about sweating out last night’s New Hampshire beers in order to get down to “ideal sending weight.”

The ravine was in full fall foliage and looked like a Bob Ross painting, except the clouds were much darker and moving quickly. Rain was coming and by 9:00 AM we were standing at the bottom of the largest alpine route that either of us had ever done.

The Pinnacle is seven pitches long, but only a few of the pitches warrant belayed protection. Most of the pitches you can simul climb or free solo if you feel the urge. In our case our plan was to simul-climb the first two pitches and then belay the remaining 5 pitches. In order to even begin that, however, you need to start the route off with an upper 4th class 40 foot free solo to the first belay ledge. 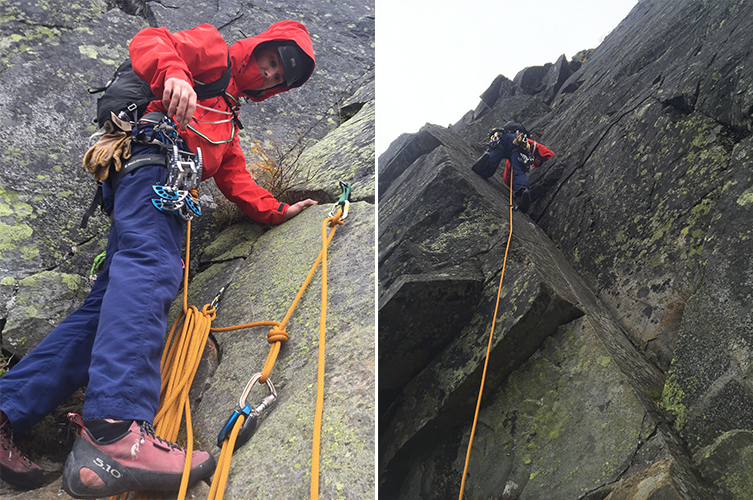 With our wits now in check, we roped in and began the 200-feet of simul-climbing to the base of the third pitch, the route’s first pitch of belayed climbing and clocking in at 5.7. It was here my partner showed me the meaning of placing a “Jesus nut”.

In other words, it’s the piece of gear you place immediately after the anchor that prevents you from taking an anchor ripping fall and meeting Jesus. This time, the Jesus nut was nothing more than an old, weathered piton that bent like string cheese when my partner clipped it. Holy shit was right.

As my partner climbed above the 5.7 pitch to link it with the following 5.8 pitch, I could barely hear the sounds of hooting and hollering. Certainly not signs of distress, but discomforting in the fact that he must have overcome some difficulty in order to feel relieved enough to hoot in the first place.

Stepping left beyond that route I realized what had him screaming at the top of his lungs. Down to my left was steep 500-foot drop to the floor of the Ravine. The climbing here was easy, but one false move and you were going for a long ride. So this is what the route description meant by “considerable exposure”.

Climbing up to my partner’s belay anchor, we realized that we had actually climbed 3 pitches. After the 5.8 pitch, you’re supposed to build a belay, but my partner essentially soloed another 60 feet to a large belay “field” (and I mean it – it is the size of a baseball diamond).

From there, only a few short simul-climbing pitches remained, and as the rain began to wear off, we realized how lucky we had been. To come up to Huntington Ravine on an October day, full foliage, dryish rock and not a single other climber on the route – now that’s a great day.

Reaching the summit of the Pinnacle, we laughingly remarked how sometimes coffee-fueled daydreams aren’t pipe-dreams after all. Walking up to the Alpine Garden near the summit of Mount Washington, it began to snow. The ideal weather window was gone and we were on our way down.

In my time as a climber and backcountry skier, I’ve experienced worse weather, more remote approaches, and greater fall potential, but I still consider a climb up Mt. Washington’s Huntington Ravine to be the epitome of wild.

Maybe it’s the loneliness of hanging out on belay 400 feet up the side of a cliff, no partner in sight, or the ominous sign that greets you at the base of the ravine: “the area ahead has the worst weather in America. Many people have died from exposure, even in the summer.” Maybe it’s just knowing that not far above you are a bunch of tourists eating hot dogs and Skittles at a cafeteria atop the Northeast’s highest mountain, and yet you still feel so far away.

Whatever the reason, I still keep coming back to Huntington Ravine. I come back to find myself “considerably exposed.” 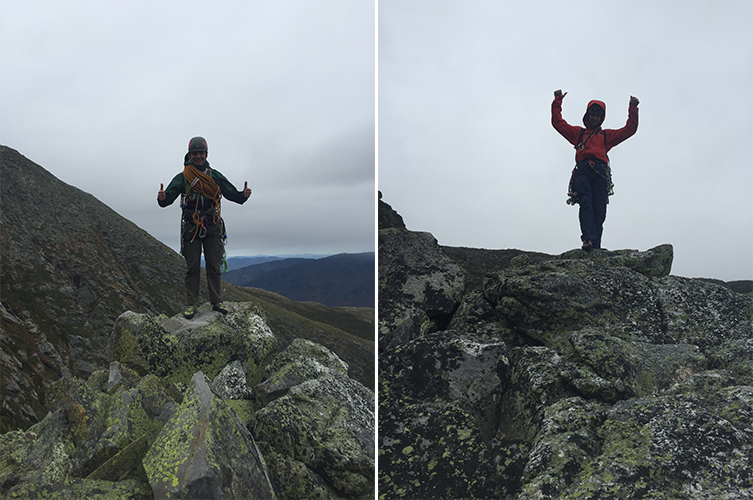 Between The Peaks Is Back with the Project Reboot In "BTP:Expedition Denali"

Climbing Mountains Doesn’t Have To Break The Bank, & These 10 Climbs Don’t