So you’re thinking of using ski boots for splitboarding?

I made the switch to a hardboot setup on my splitboard a couple of years back and here I’m answering a few questions that you may be asking as you consider making the switch.

Although I love snowboarding, I do think that skis lend themselves to be better tools overall. More balance, two edges, facing straight down, etc. Last winter I went tele skiing a few times and I am contemplating getting a setup this year to mess around on too! We’ll see.

As far as splitboarding goes—the majority of your day on a split is spent touring, not riding. So in my mind, it has always made sense to make touring as efficient as possible.

1. What are the pros and cons of hardboot splitboard setup?

Pros: They are typically lighter, tour better, side edge better, and traverse better, allow for quicker transitions, are quicker to lock your boot in, and have no straps to fiddle with or break out there.

Cons: They are usually more expensive. They also require a ski boot, so if you are going on a trip where you will ride both in bounds and in the backcountry, and you want to ride your regular snowboard in bounds, then regular and hard boots need to be packed. You will most likely have to commit to boot modifications. And your ride will be compromised a bit, but this can be adjusted depending on boot mods and ride preference.

2. How different is the ride on hardboots?

The first few times I rode in hardboots I wasn’t sure that I made the right decision. The boots are stiffer and I have always ridden some of the stiffer soft boots on the market (currently the Burton Driver X).

The biggest difference while riding is that you have less lateral movement (though this can be modified). Because the boots are stiffer you will generally have greater control, but the level of responsiveness can be hard to get used to and you may find yourself catching more edges while you adjust.

Also note that you will be leaning forward and your stance will be off without modifying the boots. In my opinion you cannot do this unless you are willing to drill and cut up your boots.

It does take some getting used to. It is hard to say if its better or worse. It’s very much a preference. Ideally you should try to make it to a splitboarding festival where Spark, Phantom, Plum, and others are demoing gear so you can check out options in person and ask hands on questions.

3. Which binding setup did you go with?

Spark Dyno DH with Dynafit toes. I really like it, they are a very simple setup with no frills. Cheaper then Phantom which is nice but they are not as cool looking (we are talking about snowboarding here!) or as light.

That being said they work really well and when in touring mode the binding itself stays in your bag keeping foot weight down.

I have heard that every pound on your foot or leg would feel the same as five pounds in your pack so keeping weight on your back is a good thing here.

4. Which boot setup did you go with?

Dynafit Winter Guide boots. They work really well, fit good and have been modified to a point where they feel similar to a stiff boarding boot but still uphill and side edge better in my opinion.

Most people in forums will say to go with Dynafit TLT6‘s for their super light weight and trusted ways to mod them. Phantom even sells kits if you wanted to get into that.

Note that you need a toe and heel welt, and some newer high end ski boots don’t have the toe welt.

5. Did you or do you use cambered pucks?

Yes, Spark canted punks. I think mine are 2-degree but looking at their site I see 3-degree available now, and also aluminum which is sweet. The canting will save your knees. I would not want flat pucks with hard boots.

6. Did you adjust boots to increase lateral flex?

Yup! Measure twice, cut once. Check out the pictures attached for reference. 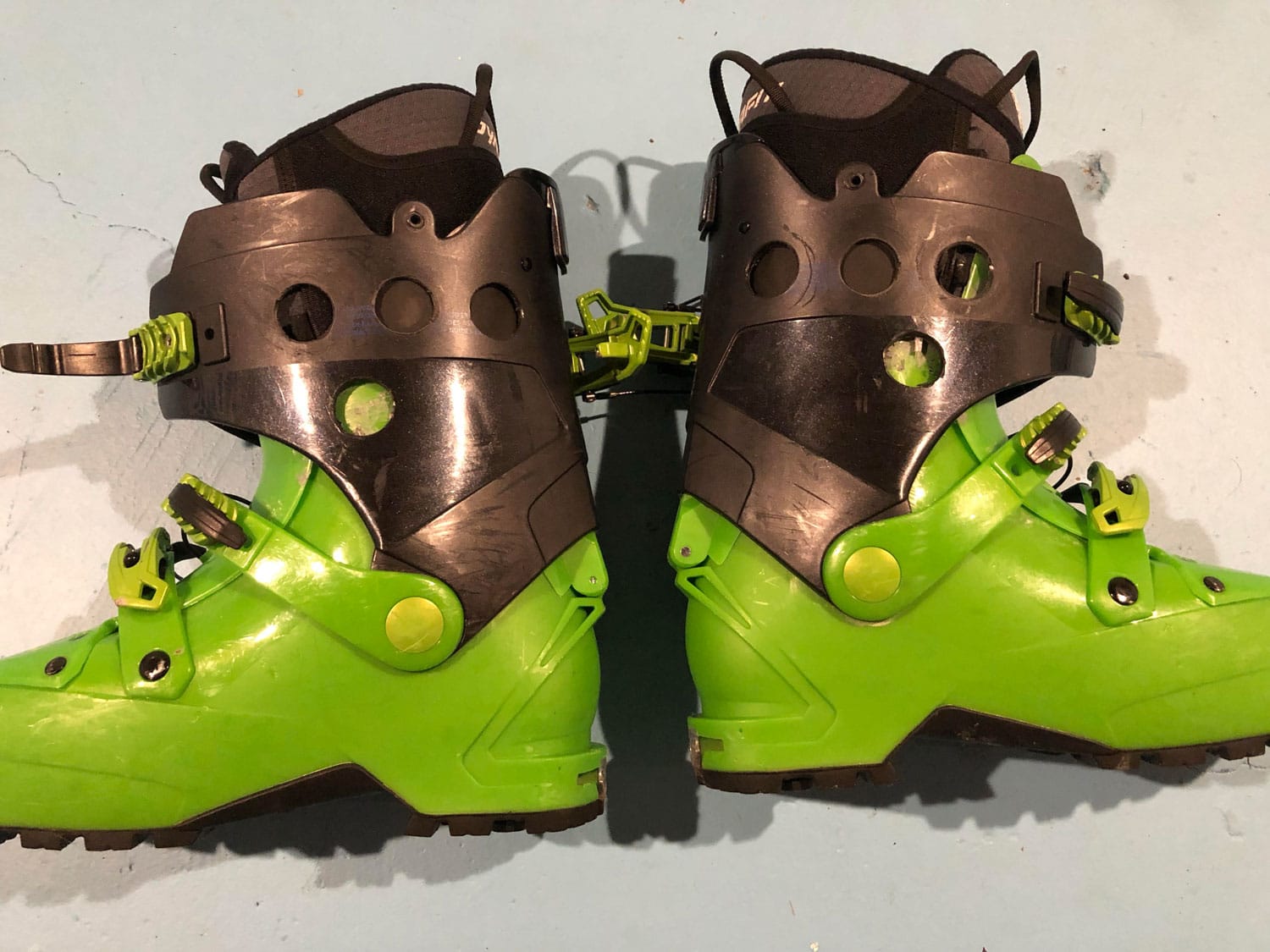 Overall I am happy with the hard boots, I think you have better side edging and traversing stability plus better control overall when touring.

The ride quality may be diminished slightly but I don’t know. Its absolutely about your preference.

I have a friend that originally had Karakoram, switched to Phantom, said it hurt his knees, then went to soft boot Sparks, and now has the Spark Dynos. I think he still has these at least…

Let me know in the comments if there is anything else that you need to know!

EP73 - How to Take Your Passion and Run With It, with Rickey Gates

EP48 – The Joy of Creating, with Artist and Adventurer Jessa Gilbert