My first time at Smith Rock was almost exactly a year ago. I was traveling west and there was no way I wasn’t stopping at one of the most iconic climbing destinations in the PNW.

It is well known as the most predominant rock climbing area in Oregon and one of the best sport climbing areas in the country.

I was only here for a day and at the time, and didn’t understand the etiquette behind finding a climbing partner on sight. The towering rock spires do not look forgiving and I was new to climbing outdoors.

So I didn’t climb then. I was honestly intimidated.

This time, I am here because I have some time off, I’m heading south to San Francisco, and I have a few climbing partners lined up. 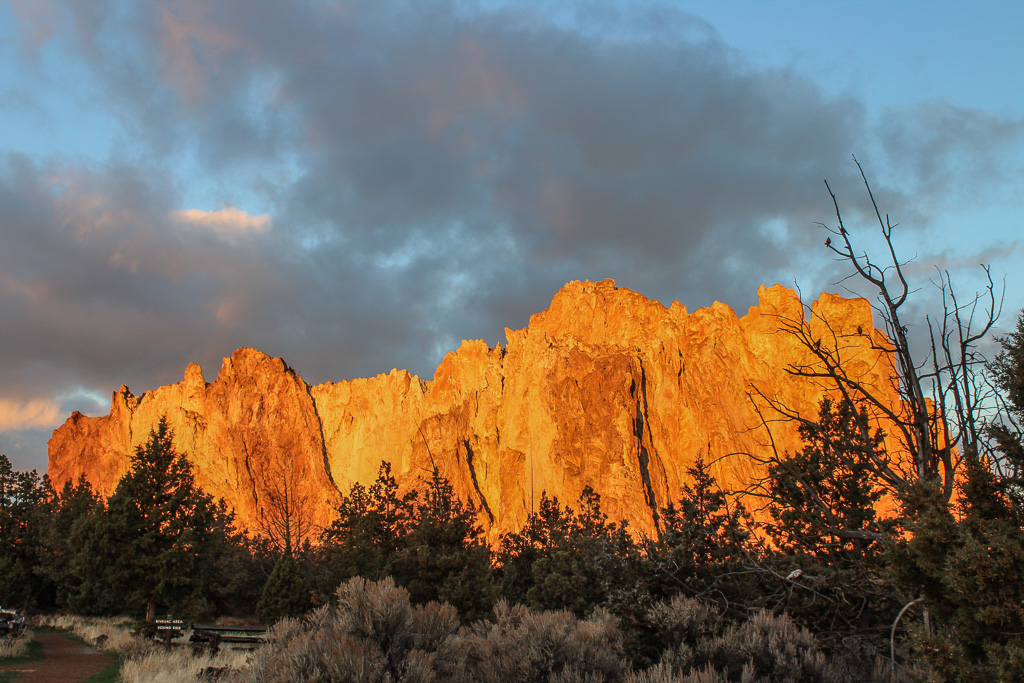 The PNW volcanos have all melted out for the season and are currently receiving fresh snow. Index in Western Washington is soaked, and I’m looking for a little more exposure than you get out of your average backpacking trip.

While it’s the rainy season in Coastal Washington, the weather is usually beautiful this time of year in Central Oregon. Located in Oregon’s high desert, late fall brings temperatures barely breaking 70-degrees mid-day in the sun, and nights that are chilly but perfect. 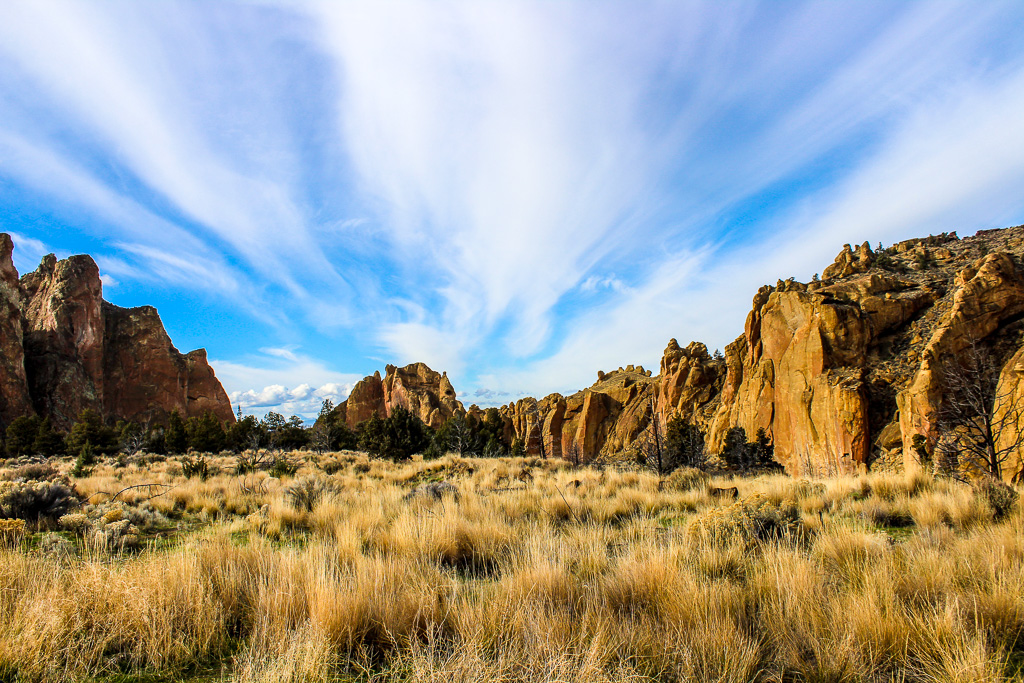 After the long ride from Seattle, I get to the parking lot late-afternoon, achy, anxious, and ready to move. My friend Ian drove down the night before and spent the morning climbing with people he met at the bivy.

I see Monkey’s Face off in the distance, the iconic Smith Rock feature. We discuss climbing it, but any route up it that isn’t a bolt ladder is above my climbing grade.

Our first climb is on the actual Smith Rock Formation. We decide on a 3 pitch 5.9 trad* route, mostly because of the name… White Satin. Here we go!

Related: What is trad climbing? 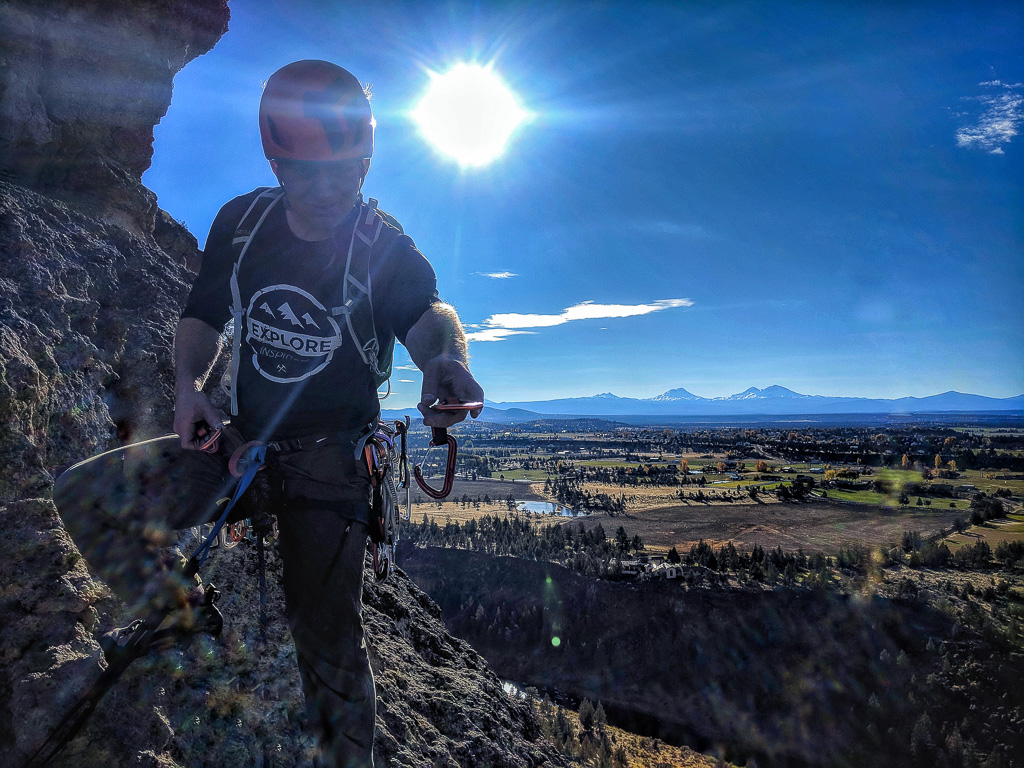 Getting On The Walls

The rock was rough but the climbing was great. The volcanic welded tuff makes for a cheese grater style igneous rock that will get in your head.

No matter how small the fall, be prepared to lose some skin.

We finish the climb rather quickly and scramble a few hundred feet of class 3 to the summit. The view of the Three Sister Wilderness over my shoulder is pristine. We watch the sunset over the peaks before rappelling of the back side. 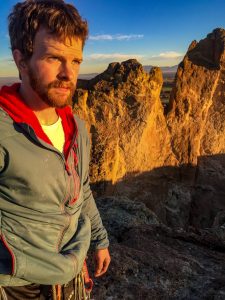 er a rappel station mixup, we end up both dangling at the end of our ropes 15 feet above the next set of chains.

During some squirrely improvisation and sketchy down-climbing, we notice a few cool routes halfway up the back side of the formation. We decide to come back the second day and get an early start.

Ian fabricated a crazy plan to climb a highly rated and trafficked five-pitch 5.9 route, called Wherever I May Roam, with the intention of rappelling and climbing three 5.10 variations mid wall.

Climbing mildly technical routes a few hundred feet off the ground. One after another. Great for getting more comfortable with exposure and better understanding the head game. 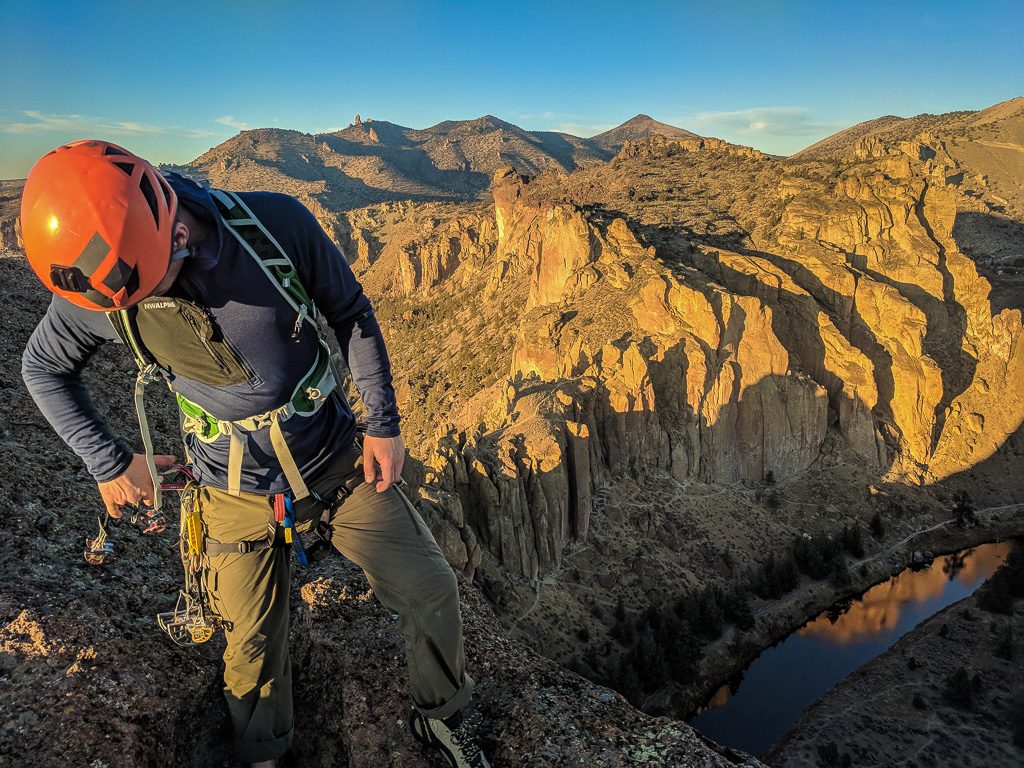 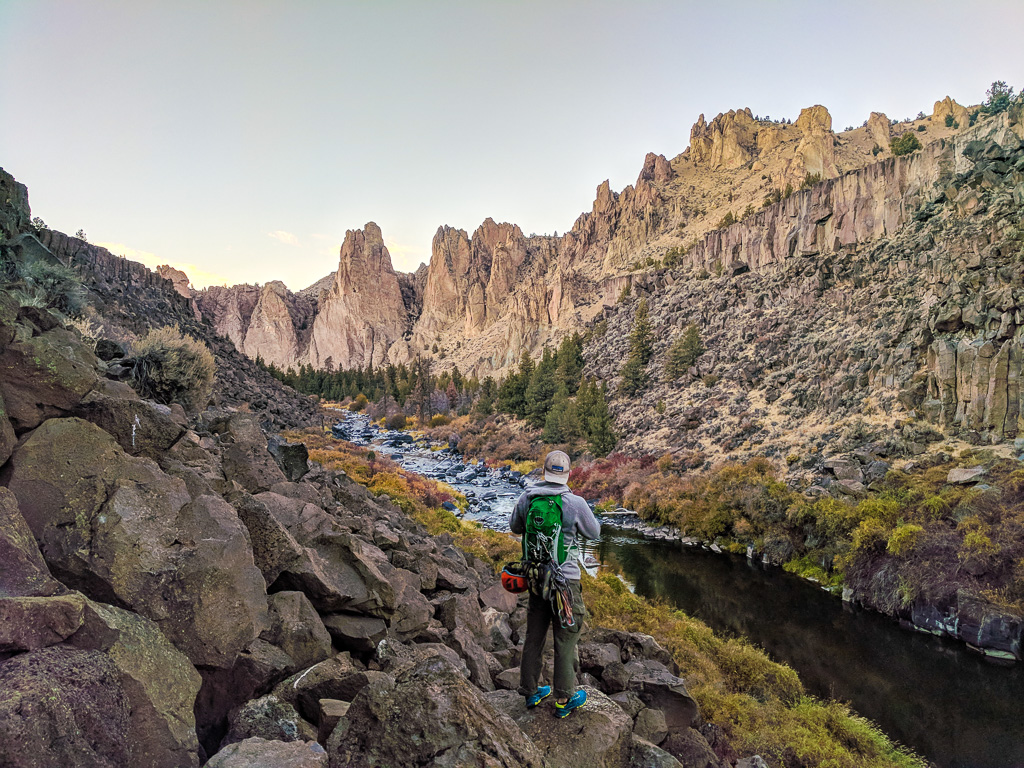 The Smith Rock area never gets boring because the terrain and rock types are so varied. Like for instance, these basalt columns down by the river. Hidden from tourists, their screaming kids, and crowds of sightseers, this rock is totally different.

While the traditional Smith Rock formations started forming some 30 million years ago, the basalt columns are newer. They were formed less than a half million years ago as lava cooled quickly on the earth’s surface that quickly cooled, buckled and split. 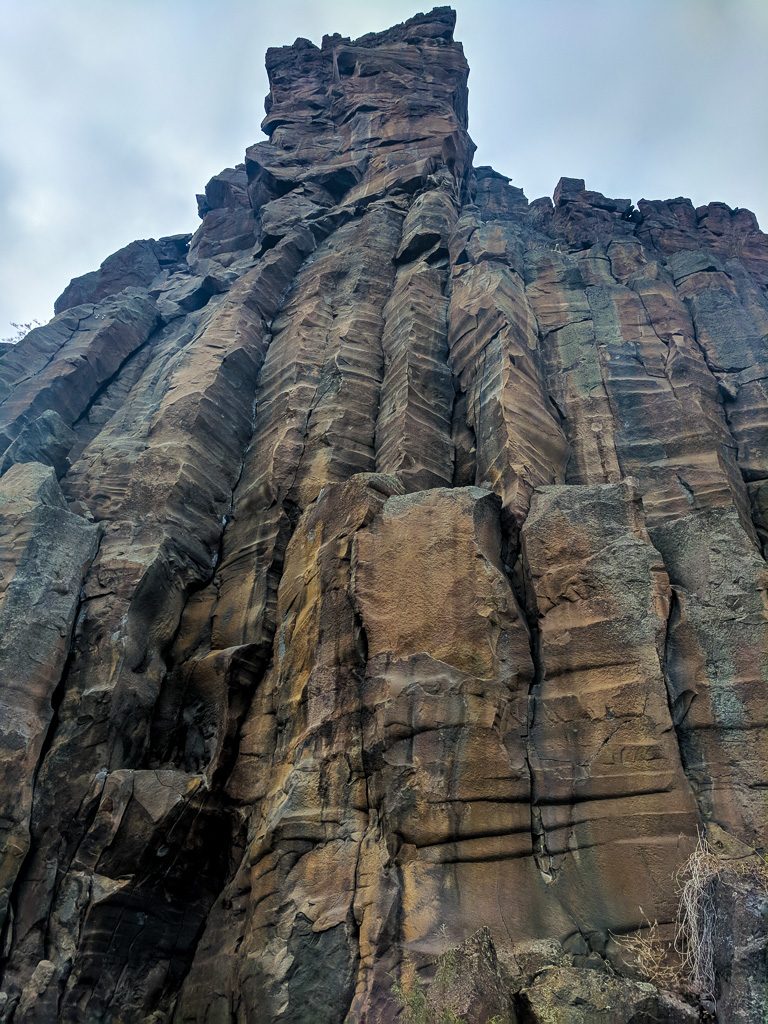 After a full day of crack climbing, I’m spent.

Just as we pack up and get ready to head back to the car, we see one last stellar route only a few cracks down… We turn to the book… 4 star, 10b… hmm. Might as well!

Now it’s really time to go. As we are packing up, Ian noticed a long finger crack on the other side of the river. At, second glance, I notice it’s long.. “tie a knot at the end of your rope” long, and it’s gorgeous.

Hand Job, the book calls it “A route for Yosemite preparation.” Gotta come back for that one.

While I sit on my tailgate at the climbers’ bivy, I think of how I need a place like this. A training ground. A place to learn on a lifetimes worth of routes. A place with character. But most of all, a place with nice weather and long seasons.

The climber’s bivy is classy. A great place to show up to alone, which is definitely something that people do. I saw one post on the cork board by the bathrooms. “Looking for a partner…have a 70m rope…max out leading 5.11 sport and trad.”

I see several vagabond climbers around. A few retired 60-something day hiking couples. There was a slackline set up. Someone playing the flute in the back of a van. Groups of twenty-somethings all wearing North Face puffys and cooking on Coleman stoves.

As I do the same, someone walks up to me an says:

“Hey Man. You looking for a partner?” “Sometimes my wife is up for belaying me, other times she is not.”

I tell him I’m good for the belay. And that’s how it goes at Smith Rock.

Peak Design Revamps the Capture, Slide, and Slide Lite With a 5-Day Kickstarter