Hearts have dropped across the mountaineering community. News broke early Sunday morning that the alpinist known as the “Swiss Machine,” Ueli Steck, has died in an accident near Camp II on Mount Everest.

The legendary climber had been spending the last month in the Himalaya, practicing and acclimatizing for his quest of linking up a new route between Everest and Lhotse. The plan was to summit Everest by the never repeated West Ridge/Hornbein Couloir route, then descend to the South Col before taking the once climbed direct line just below the Lhotse Ridge to gain that summit. No climber has ever connected these routes, and Ueli, along with partner Tenji Sherpa, had planned to do so without the use of supplemental oxygen. The video below was posted to his YouTube channel just two weeks ago, and you can find more on the details of the planned feat here.

In the video, Ueli remarks, “I will not make a definition of success, because it’s wrong,” explaining that just thinking about the objective, putting the plan together, training for it, pushing to try it, and learning from the experience is success on its own. He continues, “to be not successful, is just, if you have an accident, or if you’re gonna die. That’s definitely not successful. All the other things, it’s a success already.” Sadly, Steck would uncharacteristically not succeed this time.

Sources from Everest base camp confirm that Ueli was last seen climbing Mt Nuptse alone around 4:30 AM and hours later, a group of six rescuers discovered his body near the Nuptse face. Steck’s final Facebook post below.

Quick Day from Basecamp up to 7000m and back. I love it its such a great place here. I still believe in active aclimatisation. This is way more effective then spending Nights up in the Altitude!

Ueli Steck was widely considered the greatest alpinist in the world, having won what is basically the Oscar of mountaineering, the Piolet d’Or, in both 2009 and 2014. He was known world-wide for his record breaking speed ascents, notably of the Eiger’s North Face where he holds the current record at 2 hours and 22 minutes.

I recall watching this video of one of his Eiger ascents four years ago in utter amazement. I had never seen somebody move so quick and confidently through such extreme exposure. I then became curious about the Swiss Machine’s training plan, to learn just how he approached his mountain ascents. The answer? More or less, relentless commitment to focused objectives and lots of high altitude mountain running.

Just last year, I had the chance to grab pizza and beer with Ueli, (which he claimed didn’t affect his training as long as he moved enough that day), and chat about his athletic pursuits. For Ueli, sometimes marked as an outcast in the mountaineering world, it was more about the athletic challenges than the adventures. Following the meeting, he spoke to an audience of hundreds in the Somerville Theater about his completion of his 82-peak project. A quest that took Steck to the top of every peak in the Alps over 4,000-meters, and traveling from one to the next via bike, foot, or paraglider, on the ultimate human-powered journey through the European Alps. 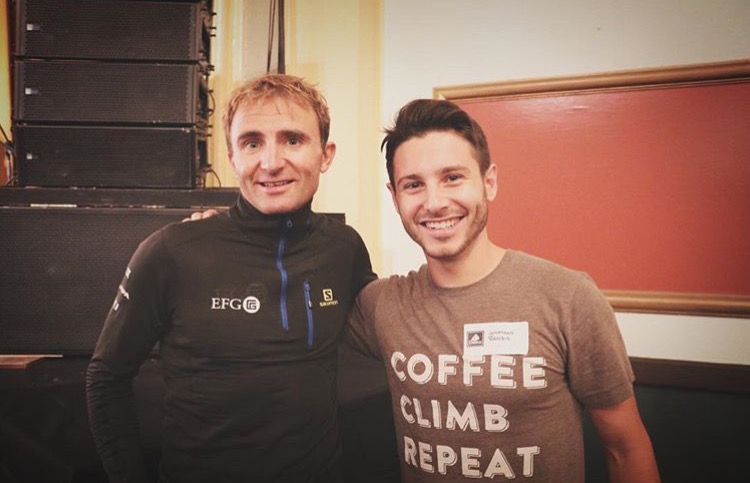 What did he see as the future of mountaineering? In Ueli’s mind, the next step would be speed ascents on the 8,000-meter peaks. While Ueli won’t be the one to continue to push the sport, and his vision of this future forward, he has certainly succeeded in inspiring a generation of alpinists to push their bodies and their ambitions harder, faster, and higher. Rest in peace Swiss Machine.