When you head off camping, whether you’re met with torrential Pacific Northwest rain or a sudden snowstorm in the High Peaks, there are times you just would rather not get out of your tent to pee. Yet too often, packing a pee bottle is a sorrowful afterthought. So this is what I know about pee bottles for the backcountry and why you need one.

One of the more questioned, and sometimes criticized scenes, in the first Between The Peaks film was when I took a full bottle piss in the tent at 16,000 feet on Mount Aconcagua.

My back was turned so there was nothing indecent about it, but I understand that in a 60 minute film it’s an interesting choice to dedicate a minute and a half to peeing. I don’t regret it. I was well hydrated and that was a very honest look into casual tent life for us on the mountain. 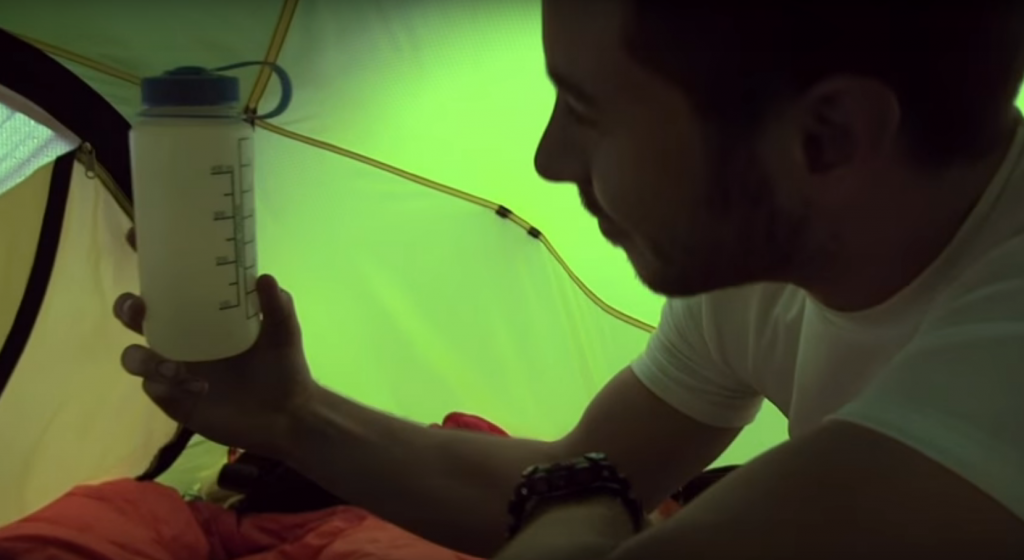 Since then, I’ve learned a thing or two about effective pee bottles. In the film, I was using (and each of us had) a Nalgene 16oz Widemouth bottle. It’s a nice enough little bottle, but most certainly not big enough to call anywhere close to reassuringly reliable. There were seriously close calls for all three of us!

Of course, like many other backpackers around the world, I’ve used my fair share of Gatorade bottles too. That’s always a decent choice for a one or two day trip because you pack in the electrolytes, drink when thirsty, and overnight, the 20oz bottle will generally do the trick.

Trips longer than a night or two, or for serious winter mountaineering when you may be snowbound in the tent for many more hours than when you’re sleeping, that’s where this falls short. Plus, they’re too rigid to call nicely packable.

Throughout these backcountry trial and errors, I found the perfect pee bottle for the backcountry. 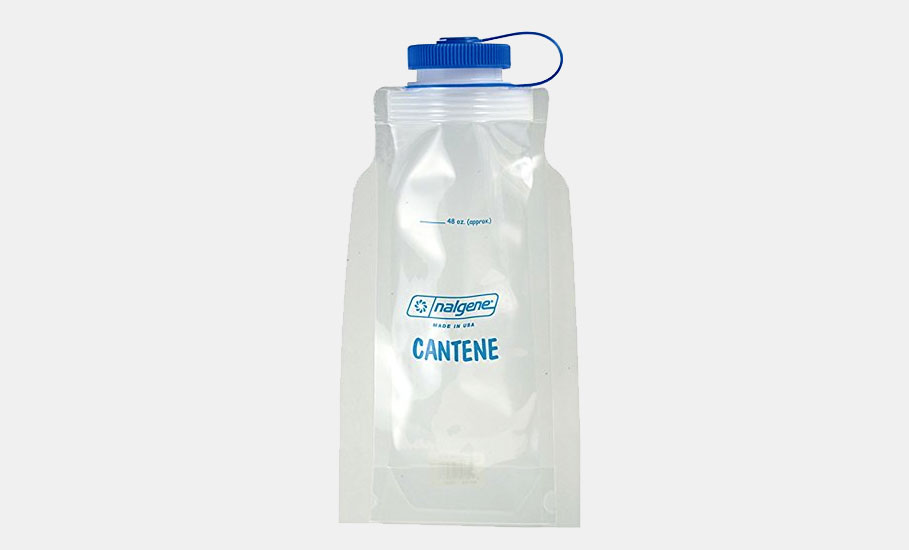 This thing was destined to be a pee bottle. You can fit 3-4 good pees in here (tested successfully) before it’s full. That gives you plenty of tent chilling time before you ever have to brave the elements, which was seriously important for me at 14,200ft camp on Denali when we got 35-40 inches of fresh snow overnight and into the early afternoon one day. After emptying, the canteen is light, foldable, flexible, and packable. It’s perfect for stashing and moving until you need it the next night!

And here’s a major bonus. After you’ve woken up to relieve yourself, and carefully screwed the bottle closed again, if it’s super cold, just stash it back inside your sleeping bag and you’ve got yourself a homemade hot water bottle!

Warning, I will not be held reliable for an in the bag broken bottle. It can happen, it has happened (thankfully not to me), and if you are a roller and thrasher in the night, think twice. I do this though and have never had an issue.

And the runner up…

Worth mentioning is another bottle I’ve seen work well, but haven’t used myself. The Hydrapak Stash 1L Flexible Water Bottle. Ryan used the Hydropak Stash flexible liter on our recent trip to Denali.

It was a last minute purchase at the Anchorage REI when, as happens too often, he neglected remembering a pee bottle for the climb. Ryan took a shot on the Hydropak and didn’t have any issues other than maybe having to empty it more often than the 48oz Nalgene Canteen.

These are pretty cool packable bottles for actually using to drink water out of while hiking and climbing as well. Just don’t mix them up!

What about the ladies?

All of this of course is told from a guy’s perspective, and yes it’s a little easier for us to go in the tent. But I’ve chatted with a few girl trekkers as well and it turns out the Nalgene Canteen is a unisex go-to!

I haven’t heard from a female who had tried the Hydropak, but I’d imagine it may be okay as well. When using the cantene, the preferred method for ladies looking to ensure in-tent cleanliness is to use a FUD (female urination device) like the SheWee or the Whiz Freedom.

I also read a solid post on Section Hiker about using a cook-in food bag for peeing instead of a bottle, which is clever and cheap, but I haven’t tried it and would be hesitant to trust that press-to-close seam seal. I’ll stick with the Nalgene Wide Mouth Canteen and recommend you do the same!

Make sure to mark your bottle! 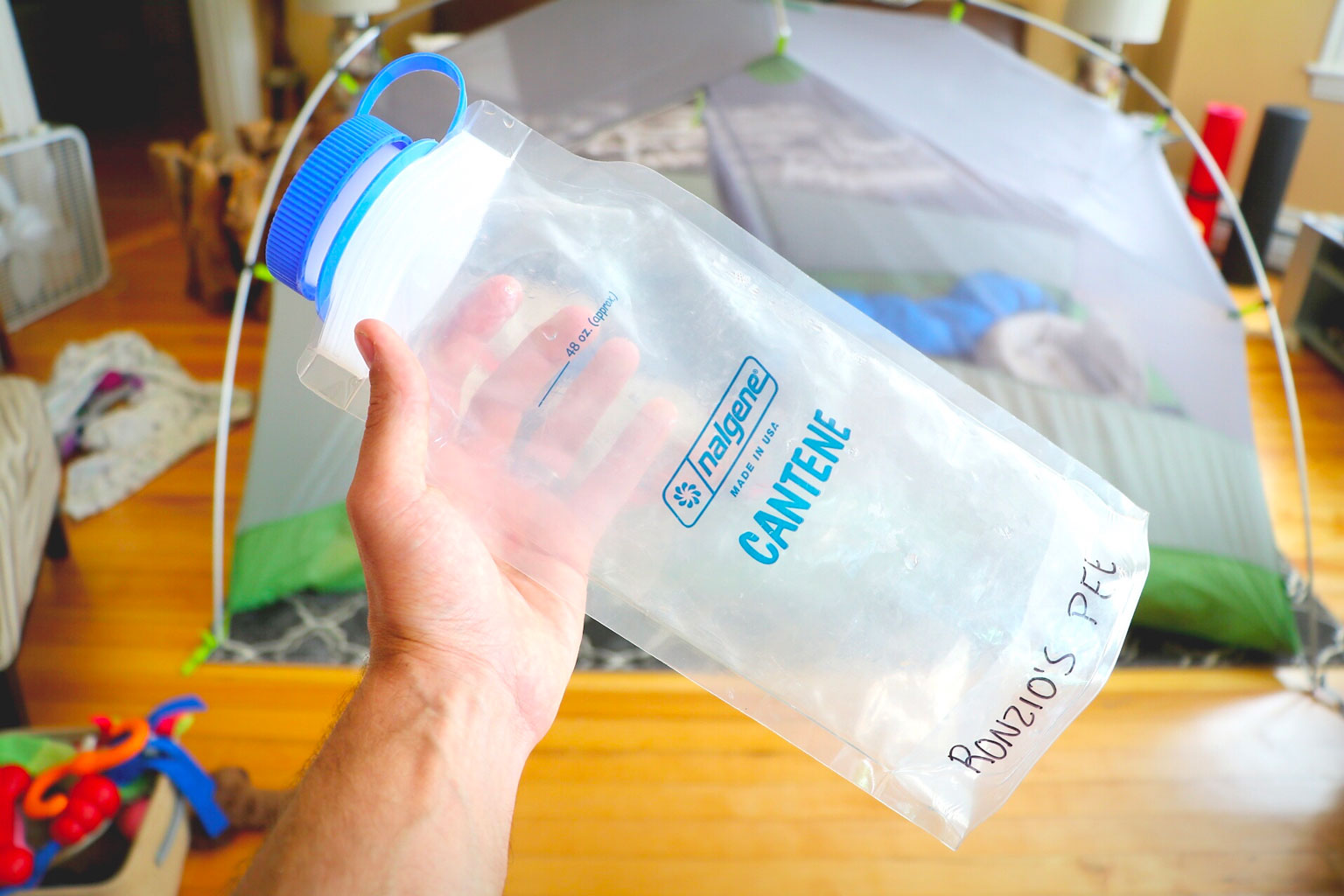 Use a bold permanent marker to write on your canteen or any other bottle you may be using, to ensure you never have a mixup and that nobody, including you, accidentally starts mixing Scratch hydration powder with melted snow in a well-used pee bottle.

Ryan’s brother used his a few times as the bottle he took to the gym before realizing the mistake and was, let’s just say, displeased. Mark your pee bottle.

Learning To Become Comfortable With The Uncomfortable

So You Want To Go Camping In Iceland In Winter?